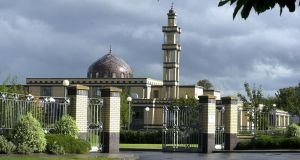 Islamic Cultural Centre of Ireland: Designed by architects Michael Collins & Associates, it won a Royal Institute of the Architects of Ireland award in 1997. Photograph: Cyril Byrne

Looking around the Islamic Cultural Centre in Clonskeagh in Dublin on Monday evening, Mirza Al-Sayegh cast his mind back two decades with obvious satisfaction.

The vice-president of the Al Maktoum Foundation, he was in expansive mood at the centre’s 20th-anniversary celebrations, attended by Muslims and non-Muslims.

The genesis of the centre came in 1990, eight years after Sheikh Hamdan bin Rashid Al Maktoum of the United Arab Emirates had established his family’s first stud farm at Maynooth.

“We [and others] sat together to talk about establishing such a place. Authorities in Dublin and Maynooth were so co-operative and so helpful, leaving no stone unturned in making this place a reality, ” he said.

Recalling a later visit by President Mary McAleese, Mirza Al-Sayegh said she had become curious about “ a big frame written in Arabic” as she was given a tour of the building. The frame told the story of a Christian king who, he explained, “1,425 years ago protected and gave sanctuary to a delegation sent from Mecca by the Prophet.

“I said to her, ‘After 1,425 years you come here to protect our Muslim community in this area. You see history repeats itself.’ As a token of appreciation we gave that frame to her to be taken home,” he recalled.

Thanking the Government and authorities, universities, other churches, charities, the al-Maktoums and the UAE embassy and other diplomatic missions, he said: “I believe that without you all this centre would not have flourished.”

In his words, Sheikh Hussein Halawa emphasisesd the Muslim community’s roots in Ireland: “We are part of this dear country. We live on its land under its sky.

“Despite the fact that we have diverse religions and various cultures, we belong to one country. We share our joy, we share our pain and we work together for a better Ireland,” he said.

Ireland has few of the tensions experienced by other European countries with their Muslim communities. US officials, quoted by Wikileaks in 2011, described the Muslims at Clonskeagh as “moderate”.

Funded by the al-Maktoums, the 5,000sq m centre, one of the largest in Europe, cost £5 million to build in 1996 and contains a main mosque that holds more than 1,700 people and two smaller prayer halls.

In addition, it has a Muslim national school, a sports hall, a library, an exhibition hall, an information centre, offices, a women’s education and social centre, a shop, a restaurant, eight apartments and a mortuary.

Designed by architects Michael Collins & Associates, it won a Royal Institute of the Architects of Ireland award in 1997. Set on 3.5 acres, it was Ireland’s second purpose-built mosque, after one built in Ballyhaunis, Co Mayo, in 1987.

Clonskeagh is the busiest Islamic centre in Ireland, with a staff of about 20. Each day, 1,200 people come for prayers; 850 children attend its Quranic school and there are 250 in the primary school.

Its iman is Sheikh Hussein Halawa, who came to Ireland from Egypt in 1996. His son Ibrahim is still held in jail, untried, in Egypt, more than three years after he was arrested there.

Imam Halawa is chairman of the Irish Council of Imams, which was set up in 2006 to represent the Muslim voice in Ireland, frequently meeting with politicians and other church leaders.

Imam Halawa is also the Muslim cleric invited to take part in most State occasions whether it be the inauguration of presidents, national days of commemoration or other State gatherings.

He is also secretary general of the Dublin-based European Council for Fatwa and Research, which considered the future of Muslims in Europe when it gathered in Istanbul last year.

Its president, Egyptian-born Yusuf al-Qaradawi is, it is claimed, a member of the Muslim Brotherhood. Firmly traditional in his beliefs, he has been banned from entering Britain, France and the US. He has visited Ireland many times.

It was suggested by US officials in WikiLeaks correspondence from 2006, released in 2011, that Imam Halawa himself was a member of the Muslim Brotherhood, but this has been denied.

His daughter Somaia Halawa has said there were no overt links between her family and the Muslim Brotherhood but, she said, she had friends who were members. Her family was “not political in that way”, she said.

However Soha Gendi, Egyptian ambassador to Ireland, is adamant that “the whole family is part of the Muslim Brotherhood, whether they deny it or not”. Whatever the truth, the issue is central to his son’s incarceration.

The Muslim Brotherhood was outlawed in Egypt until the so-called Arab Spring of 2011 and the removal of the prime minister, Hosni Mubarak. It was outlawed again by the current Egyptian regime in September 2013.

Another of Clonskeagh’s best-known figures, Dr Alo Selim, who is also of Egyptian origin, is also suspected of being part of the Muslim Brotherhood, according to the same Wikileaks documents.

In January 2013, he presented the Muslim position on abortion at Oireachtas Committee hearings in debates on the then Protection of Life during Pregnancy Bill.

“In the unlikely event when a group of competent trustworthy physicians confirm that the continuity of pregnancy jeopardises the mother’s life, abortion could be conducted as the last and only alternative, ” he said.

His book Islam and Education in Ireland, published in September 2014, caused considerable controversy with its call for “a revolution of inclusivity” in Irish schools.

Crucial differences exist between Islam and sex education in Irish schools, he said, since Islam forbids pre- and extra-marital sex, whereas the curriculum sees sex “outside wedlock as part of normal practices”.

There is also “a clash of values” between Islam and “traditional” physical education, he said. Some schools, “under the guise of health and safety”, oblige Muslim girls to take off headscarves, “which is not acceptable to them”.

When it came to music, some Muslims would see it as prohibited, but “if music is performed using non-tunable percussion instruments such as drums, most Muslims will have no problem”, he said.

On school plays, he said “physical contact between members of the opposite sex who can be legally married is forbidden in Islam” and that “gender role-reversal is not permissible”.

Subsequently, Clonskeagh and the Islamic Foundation of Ireland (IFI) said Dr Selim’s opinions were “neither shared by the IFI, the ICCI nor the majority of participating members in the Islamic community here”.