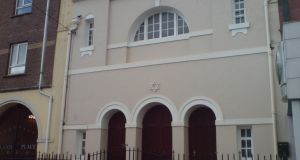 Cork’s synagogue on the South Terrace has closed.

Cork’s synagogue on the city’s South Terrace has closed following ceremonies over the weekend. “It was very sad to see something like that happen but there are very few Jewish people left in Cork,” said Maurice Cohen, chair of the Jewish Representative Council of Ireland.

The building itself was 89 years old, he said. It had become “too onerous and unnecessary” to go on maintaining it. Further, for a proper Jewish congregational service to take place a quorum of 10 males over 13 was required, he said, and such numbers were no longer available in Cork.

Services took place on Friday, Saturday, and Sunday last, attended “by people from all over Ireland as well as some from abroad who had been born in Cork. Carl Nelkin conducted beautifully,” Mr Cohen said.

He recalled how Rabbi Zalman Lent, of Dublin’s Hebrew Congregation, pointed out in an address that a synagogue was a building to serve the needs of the people, and that the one in Cork had been doing just that. It was a case of “job done”, he said.

Another speaker on Sunday was Fred Rosehill, chair of the trustees of the Cork Hebrew Congregation, who delivered “a moving speech”, Mr Cohen said.

He recalled that the first Jews in Cork originated in Portugal and ended up in Youghal, where William Annyas was mayor in 1555 - the first Jew to hold public office in Ireland.

Another well-known Cork Jewish family were the Marcuses, of whom David and Louis made major contributions nationally in the fields of literature and film, respectively.

As with the Goldbergs, the Marcus family had been living in Limerick before the 1904 boycott there, following a sermon by Redemptorist Fr John Creagh attacking Jewish people. Both families moved to Cork then.

Most of Cork’s Jews arrived there from Lithuania in the late 19th century, escaping persecution. It is believed that on arrival in Cork some among them thought they were in New York. By the late 1930s their population had reached a peak of about 450 to 500.

In recent times, services in Cork were only conducted on every fourth Friday night and during significant holidays in the Jewish calendar. It was necessary to “import” rabbis and a quorum of males so services could take place.

On the island of Ireland currently there are three synagogues in Dublin and one in Belfast, catering to approximately 2,000 Jews.

Irish-born Jews are an ageing population, but there has been an influx of younger Jews with the newer high-tech companies. Most of these, however, are secular and non-practising individuals.

Church of Ireland Bishop of Cork Paul Colton expressed his “immense sadness” at the news, “not least because the closure represents a diminution of the religious pluralism in Cork at a very time when, in Ireland as a whole, greater religious diversity than ever before is a mark of our nation”.