No campaign meeting hears about wealthy organisations, freemasonry and feminism 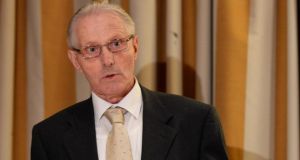 Dutch psychologist Dr Gerard van den Aardweg , at a press conference organised by the Alliance for the Defence of the Family and Marriage in Dublin. Photograph: Eric Luke

It is scientifically absurd to present homosexuality as equal to heterosexuality, according to Dutch psychologist Dr Gerard van den Aardweg.

Speaking at a No campaign event in Dublin yesterday he said: “Homosexuality is presented by the majority of the media as a question of unjust discrimination of people who in themselves are just a little bit different by nature ... denied rights the majority enjoy. This is absolutely absurd and completely nonsensical.”

The event was organised by the Catholic Alliance for the Defence of the Family and Marriage group.

Dr van den Aardweg said: “Homosexuality is not equal to heterosexuality. Scientifically this is absolutely absurd.”

Global organisations with a global sexual ideology wanted “to deal a blow to normal marriage and the family and to this end they use the homosexual movement, the sexual rights movement”, he said

He claimed many scientific institutions have been taken over by “active militant gays” who produce information to further the gay cause. He also said it was not true that homosexuals are born gay.

He said: “No one is born that way. Gay children do not exist, another propaganda item”, while gay relationships were “promiscuous by nature”.

Many gay people were “comparable with alcoholics or other persons who are addicts but they have the feeling it’s my fate”, he said.

He said wealthy organisations were interested in imposing homosexuality on the world and included the abortion movement, feminism, and freemasonry international.” He called it a “network” and said their aim was “to reduce marriage, and that will be one of the effects if gay marriage is accepted”.