‘Comfortable being gay’: a priest speaks 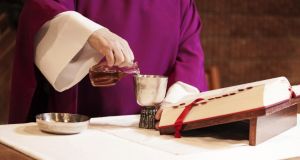 Posed by a model. Photograph: Ten03/ISPC/Getty

He asks to be described as a religious-order priest comfortable with his sexuality. He is gay. It is “one aspect of his life”. He doesn’t like the term “gay priest”. Before this interview he pondered whether to let us publish his name. But, he realised, “I don’t have any desire to make a major dramatic statement. It doesn’t define me, and I don’t want to be defined by it. I don’t want to draw huge attention.”

A few years after his ordination he began to tell people about his sexuality. “I began to open up to friends and colleagues. Then it got to the point where I got tired telling. The need went away. Anyone who needs to know knows. It’s not an issue.”

He has been aware of his orientation since puberty. It played a part in his realising he had a vocation to the priesthood. “Despite the [church’s] negative teaching I never had the sense that God didn’t love me.”

In his teens he “used to call into the church on the way home from school. It was the one place where I could be myself. God knew who I was. My sense of a calling had its seeds there.”

He also realised that priesthood was “a way of doing something worthwhile without declaring orientation”. He feels he was lucky being an order priest when it came to formation. There was “none of the narrow-mindedness” he associated with the seminary in Maynooth. He and fellow students had “more freedom within the self. There was never a negative message. It was very broad-minded.”

While not spelling out issues around their own sexuality, they were encouraged to be “as open as we could be” and “to grow in relationships”. It helped too that he could read the works of contemporary moral theologians who wrote compassionately about homosexuality.

He came to realise some colleagues shared the same orientation but “very few were naming it as gay, but many were and still are, in hindsight.”

He agrees with former president Mary McAleese, who said in a Glasgow Herald interview, published last Tuesday, that significant numbers of Catholic priests are gay.

As a priest he has preached sympathetically about gay people and challenged the church’s teaching on homosexuality and its treatment of gay people. He was called in by a bishop once for doing so. In the main he has experienced no problems from the laity when he does so, apart from a few right-wing Catholics.

Running away
He believes that for some colleagues who share his orientation, becoming a priest was about “running away from sex while having a role and status in life”. Indeed, he felt that “probably a lot of men and women, gay or straight”, who became priests or nuns, “were running away from sexuality”.

But “if that is their primary reason, it is not enough unless you are willing to become comfortable with yourself”. Failure to achieve this comfort is why some clergy became “angry, short [with people], bitter”, he believes.

Accepting himself as he is has contributed positively to his sense of vocation. “I know the margins. I know the edges, the fear of rejection, insult. I know what those experiences are like. If you grow, be honest, be true; that can be positive when dealing with other people on the margins,” he says.

In 1986 in a Vatican document the then cardinal Joseph Ratzinger described homosexuality as “a more or less strong tendency ordered towards an intrinsic moral evil; and thus the inclination itself must be seen as an objective disorder”.

In November 2005 the cardinal, by then Pope Benedict XVI, introduced new regulations for seminaries whereby men who had “deep-rooted homosexual tendencies’’ may not be accepted for the priesthood.

This Irish priest found the language “awful”, even if in church circles its meaning was not quite the same. It was all “part of a huge movement back to a pre-Vatican II church,” he said. But it was “incredible”. He was “very hurt by it”. It was “an injustice, and a huge hypocrisy when it was known that many promulgating such teaching were themselves homosexual”. Many such people, he felt, had in fact themselves become “desexualised”.

Inappropriate conduct
He disagrees with Mary McAleese’s comments about Cardinal Keith O’Brien, the former leader of the Catholic Church in Scotland, who resigned last year after allegations that he had engaged in inappropriate sexual conduct with junior priests.

In her Herald interview McAleese said: “I would have thought Cardinal Keith O’Brien, in telling the story of his life – if he was willing to do that – could have been of great assistance to gay people, not just in the church but elsewhere, who felt over many, many years constrained to pretend to be heterosexual while at the same time acting a different life.” She said that, like so many closet homosexuals, Cardinal O’Brien hoped to divert attention from himself by raising his voice “in the most homophobic way”.

The priest says that: “Mary McAleese has done a great service [to gay people] by saying what she has said. She loves the church, so when she says anything about the church she has to be listened to.” But he feels “a degree of sympathy” for Cardinal O’Brien.

“It is probable that he is nowhere near understanding his own story. He was very publicly exposed, with fingers pointing. It’s an awful place.” The priest was aware of colleagues who had worked with the cardinal in Edinburgh. “They found him supportive and, while conservative, he was pastorally decent. It’s sad. He is a product of the institutional church. I would not be judgmental.”

As for McAleese’s observation that the Catholic Church had been in denial over homosexuality for decades and that it was a case of “not so much the elephant in the room but a herd of elephants”, when it came to the number of homosexual priests, it is what he himself has been saying for years.

“The Catholic Church’s teaching on sexuality in general needs recasting, whether it be issues related to marriage, contraception, homosexuality, the whole range. It needs to be looked at – and not in a fearful way: through science, psychology and experience. People are more open about the subject than before. It needs to be more compassionate.”

Moral theology in the past “tried the impossible. It tried to legislate for every possible situation. But human nature is complex, and one size does not fit all. It needs renewal.”

Very hopeful
He is “very hopeful” in all of this where Pope Francis is concerned. “He is humane, kind, compassionate and gives a huge sense of being open to dialogue”. As for himself the priest is “happy where I am in my own life”.

He believes in being hopeful and recalls Oscar Wilde’s words: “We are all in the gutter but some of us are looking at the stars.”