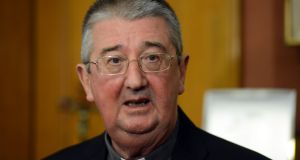 Archbishop of Dublin Diarmuid Martin said he would no longer send seminarians to Maynooth because of ‘strange goings-on’ at the college. Photograph: Cyril Byrne

Fourteen of the 26 Catholic diocesan bishops in Ireland have so far indicated they will continue to send seminarians to Maynooth, with some saying they will also send trainee priests to the Irish College in Rome.

The Archbishop of Dublin, Diarmuid Martin, said this week he had decided not to send seminarians to Maynooth due to “an atmosphere of strange goings-on there”.

He said it seemed like “a quarrelsome place with anonymous letters being sent around”, adding, “I don’t think this is a good place for students.”

Dublin seminarians would go to the Irish College in Rome instead.

Following the archbishop’s comments, The Irish Times emailed bishops asking if they intended to continue sending their seminarians to Maynooth.

Bishop of Elphin Kevin Doran said he would be guided “by the particular formation needs and personal aptitudes of the individual concerned”.

Bishop Leo O’Reilly of Kilmore and Bishop Brendan Kelly of Achonry are away. Bishop of Killala John Fleming said he had no seminarians currently.

The bishops who have said they will continue sending seminarians to Maynooth are led by the Catholic primate, Archbishop Eamon Martin.

He recalled how a priest from the archdiocese had recently been ordained and said: “We are extremely grateful to Saint Patrick’s College, Maynooth, for the spiritual, human, pastoral and academic formation that he received there.

“We ask for prayers for all our seminarians and for those entrusted with the task of their formation.”

They are supported by the Association of Catholic Priests, who said, “the damage this controversy will do to Maynooth is not in the best interest of the Irish church”.

The association said “the response to whatever the crisis is – real or imaginary – demands more than moving a few students to Rome and offering a few unconvincing reasons for the decision”.

Meanwhile, a group, Voices Against Maynooth Abuse, has been set up by a former seminarian who alleges he was sexually harassed there between 2007 and 2009. This week, he made a statement to gardaí.