Pope Francis has told people not to judge any individual 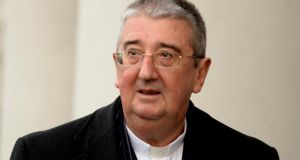 Archbishop Diarmuid Martin: Pope has “ability to see that truth and mercy are not mutually exclusive”.

Church leaders, or self-appointed church spokespeople, have been warned by the Catholic Archbishop of Dublin Diarmuid Martin against using insensitive and over-judgmental language in current debates on marriage and the family.

“Where the church argues from general principles, there is inevitably the feeling on the part of others that it is somehow against the concrete individual men and women who have a different viewpoint. This is made more complex if church leaders, or self-appointed church spokespersons, use language which is insensitive and over judgmental,” he said.

The church must voice its criticism “in language which respects her Master, Jesus Christ, who never criticised those with whom he may have disagreed about their morals, except with those who were hypocritical and all too often the hypocrites in Jesus’s judgment, it is clear in the gospels, were the religious leaders,” he said.

Speaking at St John’s Church in Tralee, Co Kerry, as part of a Lenten talk, the archbishop said he was “always struck by the manner in which Pope Francis seems to be able to speak clearly about doctrine, and yet respect and embrace those who cannot find their way to follow that doctrine. His starting point is usually not that of being head of the Catholic Church, but that of being a sinner.

“When in his first lengthy interview after becoming pope he was asked who Jorge Mario Bergoglio is, he replied without hesitation, ‘I am a sinner’; and when he asked for a moment to reflect more deeply he responded ‘Yes, that is the best way for me to describe myself: I am a sinner’.”

Archbishop Martin said that in the debates around same-sex marriage in Argentina, Pope Francis “was unequivocal in his judgment about its non-admissibility, yet he consistently told people not to judge any individual”.

Pope Francis, he said, “has the ability to see that truth and mercy are not mutually exclusive in absolutist terms. Pope Francis does not think in the black and white categories that we tend to. He sees that most of us live in the grey areas of life where compromise may often be almost inevitable.

“He sees that Christians who may live together before marriage or who live in civil marriages may indeed share more of the vision of Christian marriage than we often think. We will attain more by reaching out to them rather than by simply condemning.”

Speaking in Dublin on Monday night, the Catholic Bishop of Elphin Kevin Doran said the question posed by the same-sex marriage referendum “is not actually about marriage equality”.

“What is at issue, therefore, is a radical change in the meaning of marriage which would remove the aspect of openness to procreation in how marriage is defined and understood in our constitution for all of us.”