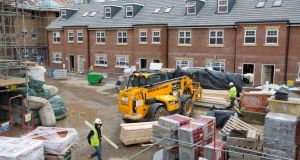 The council wants almost 1,500 homes, combining social housing and private housing for rent, to be built at three large suburban landbanks in its first major housing programme since the property crash.

Earlier this year it advertised sites at Santry and Darndale in the north of the city and Cherry Orchard in the southwest which it wants to develop in partnership with private sector or voluntary and co-operative bodies.

The council wants to use these lands for “public” housing, which would provide rental accommodation for people on the social housing waiting list and for private tenants.

The primary use of the lands will be residential with retail and other commercial uses “where appropriate”, the council said.

“The residential elements shall result in a high-quality development of mixed-tenure, managed private and public housing of various types reflecting the density needs and characteristics of the location.”

The largest of these is a 16-hectare site at Coolock Lane, at the Santry end of Oscar Traynor Road, just east of the entrance to the Dublin Port Tunnel.

The land was bought by the council in the 1980s and has been the subject of a number of proposed industrial, recreational and housing schemes since.

Despite the land being surrounded by housing estates built in the 1970s and 1980s, none of the planned schemes ever came to fruition.

However, this site is likely to be the biggest draw for developers given its location in a settled residential area close to Beaumont Hospital, just off the M1 and immediately adjacent to a Gaelscoil. It is thought this site could provide more than 700 homes.

Next largest is an 8.2-hectare site near Cherry Orchard Hospital. Of the three sites it is the one most recently acquired by the council, having been bought from the Health Service Executive 10 years ago for more than €6 million.

The site was bought for social housing which was never developed, and it could accommodate 400 houses and apartments. The site is to the west of Ballyfermot and east of Cloverhill Prison, and just inside the M50.

The third site is a 6.3-hectare plot at the junction of the Malahide Road and Belcamp Lane.

The land was assembled by the council in the 1990s and earmarked for residential development as part of the Clongriffin and Belmayne local area plan.

It could have 300 homes, but is adjacent to city council land which has been illegally occupied by Traveller families for some years.

The council said it had made offers of alternative accommodation to the families, but they had not been accepted.

Separately, two smaller sites which the council had also originally bought for housing have been submitted for consideration by the National Development Finance Agency for development of social housing, in partnership with approved housing bodies.

A report on the interested parties and the development options for each site will be presented to city councillors on Wednesday.