Polio survivors angry over being ‘abandoned’ by Rehab

Charity cut off support in 2015, although 60% of survivors may develop post-polio syndrome 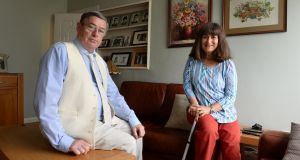 Ageing polio survivors are “furious” and hurt, saying they have been “abandoned” by the Rehab Group more than 30 years after the Polio Fellowship of Ireland (PFI) merged with it.

Among them is Park House, a large Victorian property on Park Avenue, Stillorgan, bought originally by PFI to rehabilitate polio survivors, now used as a Rehab adult education centre.

In 2014, however, following the closure of Rehab’s charitable lottery, it announced all funding to PSI would stop. After negotiations, a final payment of about €35,000 was agreed in 2015.

PSI’s chief executive Fran Brennan said: “Through 2016 and 2017 we did all we could to convince Rehab that, if anything, our members’ needs were increasing rather than decreasing. The whole reason for the original merger was to safeguard the organisation’s capacity to support survivors with ongoing needs.”

Dealing with Rehab was “extremely difficult”, he said.

“The members ... believe that the Rehab Group, through its subsidiary Polio Fellowship of Ireland (PFI), has an obligation to support polio survivors in accordance with the PFI’s constitution.”

On December 15th, 2017, Mr McGillion wrote again, noting Rehab’s lack of response. He said the PSI board was forced to conclude that this “reflects the ongoing disregard and disrespect with which the Rehab Group appears to view polio survivors”.

“The board of Polio Survivors Ireland has made several attempts this year [2017] to bring to the attention of the board of the Rehab Group what polio survivors consider to be their abandonment by the organisation that was established to meet their needs, and the betrayal of the assurances that were given to polio survivors at the time of the merger.”

Mr Brennan told The Irish Times this week: “Rehab just stopped replying. The only word I can use to describe the way they have treated polio survivors is ‘contempt’.”

Up to 7,000 adults who contracted polio in the 1940s and 1950s live with the debilitating condition. About 60 per cent of these have, or will develop, post-polio syndrome (PPS), where survivors, as they age, experience accelerated weakening of muscles leaving many wheelchair-bound, suffering extreme fatigue and unable to swallow food. Many feel very cold all the time.

Their needs – which may include wheelchairs, stair-lifts, leg callipers and grants towards heating costs – are of particular concern to the Justice for Polio Survivors campaign, founded in 2017 by survivors after the breakdown in relations between Rehab and PSI.

Though many are frail and elderly, they have been protesting regularly outside Rehab’s Roslyn Park headquarters in Sandymount, Dublin for a year. They want a meeting with Rehab and are calling for funds they say were raised by polio survivors, and “gifted to Rehab”, to go to survivors.

PSI is not directly involved in the campaign but “fully supports them”, says Mr Brennan.

Among those protesting is Josephine O’Reilly (67), who contracted polio at home in rural Italy when she was six. Her parents, concerned she would not thrive in a farming economy, accepted an invitation from her father’s brother to help run a cafe he owned – the Lido – in Bray, in 1962.

She attended the Central Remedial Clinic school, progressed to secondary school and met her husband Tom shortly after her Leaving Certificate. They had five children and ran the Noggin Grill takeaway in Sallynoggin until four years ago.

“Having polio, everything was a struggle but I was determined to live a normal life. I accommodated everything around to myself.”

Her leg, arm and hand muscles are weak. Walking, lifting and carrying are all difficult. She cared for her babies while seated on rugs on the floor, pulling herself up with a series of pulleys around the house. She carried laundry upstairs by placing the basket one step at a time in front of her. At work she had everything assembled around her so she would not have to move from her position at the counter.

And now she has post-polio syndrome. “I am getting weaker. I will need callipers because I keep falling. I will need a wheelchair. And I just cannot get warm. We have to have the heating on all the time.

“We used to get help from PSI but now that it gone.”

She is “very angry” about the situation with Rehab and support for polio survivors.

“I am furious really because I see my friends who are really in need, really struggling a lot more than me. They are in their 70s and 80s. I know I am getting there as well. They are in a lot of pain. We don’t have the time, we are ageing. We are not going to be here much longer. I am really furious. They have just discarded us.”

In a statement, Rehab said the services and grants they believe polio survivors need are provided by the HSE.

“We are a charity, not a grant-giving organisation such as the HSE. We cannot simply supply a service to an individual without that person first having an assessed need and being referred to one of our services. Any new service for people with disabilities, including post-polio syndrome, is only delivered in conjunction with the HSE and accessed through local HSE structures.

“Between 2000 to 2015 we donated €583,000 to Polio Survivors Ireland. This money was raised through the charitable lottery fund. In 2015, on foot of the lottery being wound down, Rehab Group informed PSI it was no longer in a position to continue to do so.

“The cessation of the lottery fund had a significant impact on Rehab’s funding stream. As financial sustainability is a key pillar of our long-term strategic plan, we could no longer continue to make these donations. We have no legal obligation to provide funding to Polio Survivors Ireland.”