Stephen Fry gives his views on the existence of God during an appearance on 'The Meaning of Life with Gay Byrne' in February 2015. Video: RTÉ 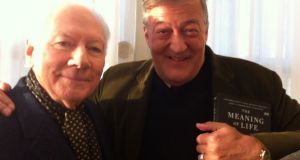 Gardaí investigation and accusation of Blasphemy against Stephen Fry and decided not to take any action.

New Zealand plans to scrap the crime of blasphemy following calls for reform in response to a Garda investigation into British actor and comedian Stephen Fry.

David Seymour, leader of ACT, a minor opposition party, who has instigated the move, said politicians of all stripes wanted to end what they saw as an archaic curb of freedom of speech.

“New Zealanders cherish the fact that we have strong separation between church and state,” he told AFP.

“So when people discovered that there was a law that meant you could spend a year in jail for offending someone of a religious persuasion there was widespread condemnation.”

Fry made critical comments about God during an interview with presenter Gay Byrne on RTÉ in February 2015. A complaint that Fry’s comments were in breach of the Defamation Act was made by a man in Ennis Garda station more than two years ago.

Mr Seymour is due to notify parliament on Thursday that he intends to include blasphemy on a list of laws that are scheduled to be scrapped.

He said the government had agreed to the move and the repeal should be complete by the end of the month.

In a letter in Wednesday’s Irish Times, evolutionary scientist Richard Dawkins quotes a sentence from his book The God Delusion, “as a gesture of solidarity with Stephen Fry”.

“The God of the Old Testament is arguably the most unpleasant character in all fictions: jealous and proud of it; a petty, unjust, unforgiving control-freak; a vindictive, bloodthirsty ethnic cleanser; a misogynistic, homophobic, racist, infanticidal, genocidal, filicidal, pestilential, megalomaniacal, sadomasochistic, capriciously malevolent bully,” he writes.

“Every one of these adjectives is amply documented, with full biblical citations, in Dan Barker’s book, God: The Most Unpleasant Character in All Fiction.”

Mr Dawkins said he will be giving a public lecture in the National Concert Hall in Dublin on June 12th and “I shall therefore be available for arrest on a charge of blasphemy”.