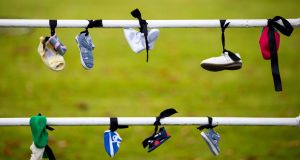 The Commission of Investigation into Mother and Baby Homes published its long-anticipated report on Tuesday. It investigated decades of harm caused to tens of thousands women and children at 14 mother and baby homes and four county homes across Ireland between 1922 and 1998.

*Fathers and families Responsibility for the harsh treatment of unmarried mothers in Ireland lies mainly with the fathers of the children and “their own immediate families” but supported by and condoned by the State and the churches. It says many of the homes provided a refuge, even if harsh, while the families provided no refuge at all.

*No alternative The report finds no evidence that women were forced to enter the homes by the church or State It says most women had no alternative. Many women contacted State or church agencies seeking assistance as they had nowhere to go and no money. Women were also brought to homes by family without being consulted.

*Infant mortality Some 9,000 children died in mother and baby homes, around 15 per cent of all those who entered the institutions, the report found. In the years 1945-46, the death rate among infants in mother and baby homes was almost twice that of the national average for “illegitimate” children. The commission said the high rate of infant mortality was a “disquieting” feature.

*Little public concern The report found little evidence that politicians or the public were concerned about children in the homes, despite the “appalling level of infant mortality”.

*Abuse of women The report finds while “there is no doubt that women in mother and baby homes were subjected to emotional abuse but there is very little evidence of physical abuse and no evidence of sexual abuse”.

*Pregnancies Some pregnancies were the result of rape; some women had mental health problems, some had an intellectual disability and the only difference with other women not in homes was that they were unmarried. It said their lives were “blighted” by pregnancy outside marriage.

*Records Adopted people should have a right to their birth certificates and birth information. A mechanism could be put in place to allow a birth mother to argue for her privacy rights.

There should be a central repository of the records of institution so information can be obtained from one place.

There are no records of burials of children who died in many cases, it finds.

*Redress Any decision on financial redress is a matter for Government, the commission said.

– But as some groups in similar situations have received financial redress the State should not discriminate, it said.

– Women who worked outside the institutions without pay, women in the Tuam home in Co Galway who had to care for other mothers’ children and those who looked after other residents in county homes should be compensated.

– Women who spent lengthy periods in homes should also be considered for redress.

*Fund The Government could consider earmarking a specific fund for current disadvantaged children.

*Tusla The commission defended the Child and Family Agency (Tusla) and its approach to providing information to adopted people. It said the problem was not with Tusla but with the law.