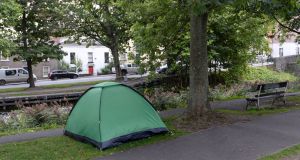 Many homeless adults are becoming drug and alcohol addicts after becoming homeless, according to the largest voluntary drug rehabilitation service.

Merchant’s Quay Ireland (MQI), which publishes its 2016 annual report on Friday, wants Minister for Housing Eoghan Murphy not to “lose sight” of the situation of thousands of homeless adults in the midst of escalating concern about homeless families.

The charity is calling for greater investment in quality emergency accommodation for adults, to minimise the risk of those newly homeless turning to drugs and alcohol.

The report’s publication comes as latest figures show there were 1,942 adults, without children, in emergency accommodation in Dublin in July, up from 1,914 in June.

MQI chief executive Tony Geoghegan said that while the traditional picture of homeless adults was that the majority had serious mental-health and addiction issues, this was increasingly not the case.

“Many coming into emergency accommodation have no history of drug or alcohol abuse, but because they are spending so long in totally unsuitable, hostel-type accommodation where there are drug users, some are getting involved in drugs.

“We need a concrete plan and strategy to once and for all end rough sleeping and the necessity for people to go into congregated emergency accommodation where, in many cases, there are drugs being used.”

He also called for greater flexibility from drug treatment facilities to recovering addicts, many of whom are homeless. Their chaotic accommodation situations often led to them missing appointments or being late to collect methadone, which in turn made them more vulnerable to using drugs.

He said it remained “a necessity and much sought-after facility for our clients. A roof over our heads in a warm, welcoming safe environment is something most of us take for granted. However, for our clients this is a luxury.

“Apart from meeting this important need the night cafe is a also often a gateway through which vulnerable clients can access a full suite of services.”