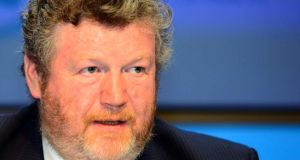 Minister for Children Dr James Reilly: his spokesman said nothing had been ruled out and officials were drawing up a new early-years strategy.

Government officials have advised against a tax credit scheme for childcare on the basis that it would unfairly benefit higher earners and discriminate against stay-at-home mothers.

Parents have expressed growing frustration in recent days over the high cost of childcare. It follows a widely publicised letter by Cork mother Donna Harnett last week in which she described giving up work due to exorbitant childcare costs.

While there have been calls for tax allowances to make childcare more affordable, Minister for Children Dr James Reilly said in a parliamentary question a system of tax allowances would not benefit parents working in the home and could be seen as discriminatory. In addition, tax reliefs would favour the high paid while those on the minimum wage or in part-time work would not benefit to the same extent.

“Many parents use childminders or relatives to meet their childcare requirements and may not be in a position to obtain receipts, making it impossible for them to establish their entitlement to tax relief,” Dr Reilly told the Dáil, in reply to a parliamentary question.

“There is also a view that the introduction of tax credits could lead to increased prices and therefore have limited impact in terms of savings to parents.”

A better approach was to make childcare more affordable through the free pre-school year and other targeted measures.

Dr Reilly’s spokesman last night added, however, that nothing had been ruled out and officials were drawing up a new early-years strategy. This would include an analysis of options for financial support which would allow “parents to make decisions about their lives confident about the proper care of their children”.

The Minister’s parliamentary response, however, is likely to win little support from many working parents who are saddled with some of the highest childcare costs in the world. OECD figures show an average family of two here spends 40 per cent of the average wage on childcare costs. For a two-child family, that amounts to almost €16,000 a year.

Fr Seán Healy of Social Justice Ireland said the Minister was correct in stating that tax allowances would disproportionately benefit the better off. However, he said a system of refundable tax credits was a fairer way of ensuring childcare would be more affordable for all income groups.