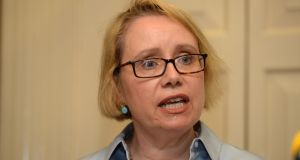 Fiona Ryan, head of the Irish domestic abuse charity Sonas, has been appointed the first permanent Commissioner for Survivors of Institutional Childhood Abuse in Northern Ireland.

Ms Ryan will take up the £71,932 per annum post on a five year term from December 14th. She will take over from Brendan McAllister who was appointed as interim victims’ commissioner in the summer of 2019.

“In welcoming Fiona Ryan as Commissioner for Survivors of Institutional Childhood Abuse we are taking another significant step forward for victims,” said the Deputy First Minister Michelle O’Neill who announced the appointment in the Northern Assembly on Tuesday afternoon.

First Minister Arlene Foster described the appointment as significant and said that Ms Ryan would be taking up an “important and sensitive” post.

The appointment follows from the 2017 recommendations of the late judge Sir Anthony Hart who found there was evidence of sexual, physical and emotional abuse, neglect and unacceptable practices across 22 Catholic and Protestant and state- run homes.

Sir Anthony in his Historical Institutional Abuse report recommended that survivors of abuse should receive lump sum payments ranging from £7,500 to £100,000 depending on the severity of the abuse.

Ms O’Neill told the Assembly that so far 579 people have applied for compensation under the redress scheme, with 156 of them from people who participated in the Historical Institutional Abuse inquiry chaired by Judge Hart.

She said that currently it was recommended that £4.1 million be paid out to victims with £2.6 million of that figure already allocated.

Ms O’Neill also said that it was proposed to hold round-table discussions with representatives of the Catholic and Protestant churches involved in running the homes to determine what level of compensation they might pay to help meet the overall costs of the scheme.

Ms O’Neill said that the projected cost of the scheme ranged from a lower figure of £149 to an upper end sum of £668 million.

The SDLP chair of the Executive Office Assembly scrutiny committee Colin McGrath, in welcoming the appointment, said, “We now need to see swift implementation of the Hart recommendations, ensuring that the redress process is completed quickly and fairly, delivering an appropriate apology to victims and the memorial commitment.”

Ms Ryan currently is chief executive of the Sonas domestic violence charity, the largest provider of frontline support services to women and child victims of domestic abuse in Ireland. She is the former head of Alcohol Action Ireland.

She is a member of the monitoring committee of the National Strategy for Domestic, Sexual and Gender-based Violence in the South where she advocates on behalf of victims and monitors Government commitments to victims under the strategy.

She is also a member of the Department of Justice’s study of familicide and domestic homicide reviews. She holds a masters degrees in journalism and business administration. She is a native of Cork City.