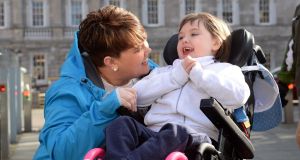 Lynn Marie Walsh, Kildare Carer of the Year, with her daughter Jessica (9), who has Rett Syndrome, at the Family Carers Ireland launch of the Share the Care campaign at Leinster House. Photograph: Dara Mac Dónaill/The Irish Times

Every morning after her daughter is picked up for school, Lynn Marie Walsh begins the daily routine of stripping the covers from her child’s bed and sterilising the sheets and blankets.

Each day she must take these precautions to ensure her daughter Jessica (9), who suffers from a rare genetic disorder, does not pick up any type of infection.

Jessica cannot walk, talk or feed herself. She suffers between 25-30 seizures a day and is fed through a feeding tube.

Her exhausted mother is her primary carer, and dedicates every minute of her day to looking after her young daughter.

“I gave up a full-time job at St Patrick’s hospital to take care of Jessica, I’m with her 24/7,” says Ms Walsh.

“She doesn’t sleep well, she might get two hours, an hour’s sleep. I have to be there because sometimes I have to go in and resuscitate Jessica when she stops breathing in the middle of the night.

‘She can stop breathing’

“Not everybody will look after Jessica because of the seizures and because she can stop breathing, so it’s very traumatic for the person that’s taking care of her.”

Jessica suffers from a rare genetic neurological and developmental disorder called Rett Syndrome, which affects the way the brain develops.

Children with the disorder tend to develop normally during the first few months of their lives, but then begin to lose the skills they have developed such as the ability to crawl and communicate.

Speaking at the launch of the Family Carers of Ireland campaign entitled Share the Care, Ms Walsh said she did not want the State to put her daughter into residential care but to provide the necessary support and resources to keep her at home.

“We [carers] know the child or adult inside out. We know what they need. It’s for their own dignity they should be with family members.”

Ms Walsh expressed her exasperation at the belief by some that carers just lounge around when their children are in school.

“Our job never stops. Our job is 24-hours, round-the-clock, and we don’t get a break. If I get ill tomorrow I have nobody to take care of Jessica.

“If something happens to me, where does Jessica go? It’s constant work.

“I have a 13-year-old son. I’m trying to split myself between two children that need me - but Jessica needs me more.”