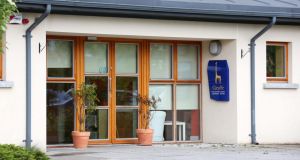 The Giraffe Childcare and Early learning Centre, Belarmine, near Stepaside, Dublin. It said “clear evidence of inappropriate conduct in caring for young children by a particular staff member, who has already been suspended” had been uncovered and filmed during an investigation by an undercover reporter.

A south Dublin creche has admitted “unacceptable conduct” by one of its staff in the way in which they dealt with children in their care.

The Giraffe creche in Belarmine, Stepaside, Dublin, said “clear evidence of inappropriate conduct in caring for young children by a particular staff member, who has already been suspended” had been uncovered and filmed during an investigation by an undercover reporter.

In a statement it said: “Such incidents involved the unnecessary strapping of children in to their chairs for purposes other than meal time or table top activities. The children were seated for periods longer than necessary or to be considered best practice.

“The footage also highlights the unacceptable behaviour of aforementioned member of staff and her abrupt handling of the children during rest and sleep periods. There was also an indication that parents’ communication diaries may have been fabricated and a question over the maintenance of the allergy list.”

Simon Dowling, managing director of the creche, said: “I am deeply upset and disappointed at the subject matter shown in the recorded footage. It is unacceptable and totally against everything we represent at Giraffe.”


Secretly filmed
Giraffe is one of three creches secretly filmed by RTÉ, which expects to broadcast a Prime Time programme on the matter.

The creches are being investigated by the HSE and gardaí for “various degrees of mistreatment of young children”, the broadcaster said.

The HSE said it was investigating three creches while gardaí said they were investigating two. The other two creches include Links creche in Abington, Malahide, Dublin, and Little Harvard in Rathnew, Co Wicklow.

Links has dismissed one member of staff and suspended three others. It said in a statement it was carrying out an investigation but it believed the matter was “isolated to a specific staff member in the Abington creche”. It said it was “regrettable” the reporter did not report the matter to management immediately.

Little Harvard said in a statement it had not yet seen the RTÉ footage and would “fully investigate” the matter.


Assessment
The HSE said it received reports from gardaí this week relating to three creches and would make an “assessment with respect to any child welfare and protection concerns”.

It said it also received anonymous complaints last month about the creches from the undercover RTÉ reporter.

RTÉ said its investigations unit would early next week broadcast a programme showing “inadequate care and serious breaches of childcare regulations” involving young children in specific rooms in the creches. It said there was no violent or sexual abuse.

One woman whose children attend the Links creche in Malahide said there was “hysteria” among parents at a meeting on Monday. “It has been horrendous. It has been really traumatic,” said the woman, who asked not to be named. “I have put my faith in the creche ... what’s your choice?”

Another parent had “nothing but good to say about the creche”, while most declined to comment.