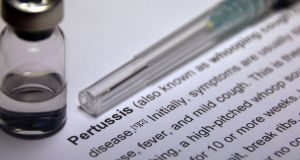 Scientists from Trinity College Dublin are to play a central role in the research for a new whooping cough vaccine. Photograph: iStock

A disease doctors thought had long gone has come back to cause illness and even death. But an international team of scientists has been formed to help build new treatments against it.

The tragedy is that the disease, whooping cough, which can affect people of any age is particularly dangerous for infants and young children.

We have vaccines for the condition but they have gradually become less effective so their ability to protect is failing.

This has prompted the formation of a group of leading scientists from 22 institutions who will lead the way to more effective whooping cough vaccines.

Called Periscope the pan-European project has a budget of €28 million from the EU, the Bill and Melinda Gates Foundation and from industry.

“We thought until a few years ago we didn’t have to worry about whooping cough,” said Prof Mills, who is Trinity’s professor of experimental immunology.

A vaccine was developed in the 1980s and came into widespread use but it had side-effects, he said.

A better one came on stream in the 1990s and is the one we use today but it had hidden problems, Prof Mills said.

One in the UK in 2012 caused 13 deaths and in that year the US saw more cases of the disease than were seen before any vaccines came along.

A recent Australian outbreak triggered 15,000 cases and other countries are experiencing similar problems

“We really need a new vaccine,” Prof Mills said. It is hoped that this international effort will do just that.