Ulster Unionists advised US government ‘not to humiliate’ Ian Paisley 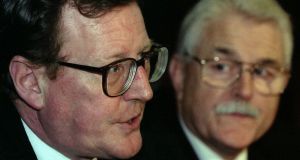 David Trimble and Ken Maginnis of the Ulster Unionist Party told the US government “it was important not to humiliate [Ian Paisley] any further”. Photograph: Michael Crabtree/Reuters

The Ulster Unionist Party gave the US government advice on how to handle Ian Paisley saying “it was important not to humiliate” the Democratic Unionist Party leader as Northern Ireland edged towards a settlement.

In a memo sent to the Northern Ireland Office by the British counsellor in Washington, Peter Westmacott, the diplomat described how the UUP leaders were pleased with their reception in Washington.

Soderberg asked what the unionists thought the IRA was up to and how the Clinton administration should handle Adams.

“Ken Maginnis said Adams was on a short leash and was dispensable. That was why neither [Martin] McGuinness nor [Mitchel] McLaughlin had not come to the US with him.”

Adams, Maginnis claimed, “had not sold the ceasefire to the hard men in South Armagh as a possible end to violence. They saw it rather as a chance to rebuild the IRA’s political base after a series of reverses”.

In the MP’s view, Sinn Féin would adopt a strategy of civil disobedience and confrontation as a means of keeping pressure on the British government. “The IRA enjoyed very limited support. Adams was no Arafat or Mandela”.

Soderberg asked the UUP about Ian Paisley’s forthcoming visit to the US in October. Responding, Trimble and Maginnis said “it was important not to humiliate him any further”.

“Paisley the martyr could attract a lot of sympathy,” they said. “But he needed to be kept in play.”

They added: “There should be ‘nothing at the White House for Paisley. Soderberg took note.”

Soderberg wondered about how to reach out to the “Protestant paramilitaries”. Trimble felt it was important for the US to have some contact with them. Soderberg replied that the Clinton administration was ready to help “in the same way they had tried to do with the IRA”.