Students’ union calls for youth vote to be taken seriously 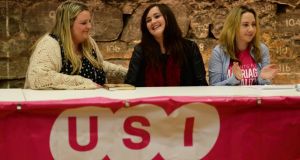 Political parties have been urged to take the youth vote much more seriously. “Young people do vote, so you need to represent them,” Union of Students in Ireland (USI) president Laura Harmon said as the union launched its proposals to improve the voting registration system.

“The youth vote has been mobilised following the marriage equality referendum. It is worth getting out,” USI vice-president Annie Hoey added.

“Our political representatives need to engage with young people and listen to what they have to say during the next election,” Ms Harmon told The Irish Times.

The union worked for seven months in the run-up to the referendum on May 22nd, registering 27,633 new voters directly and handing out tens of thousands of registration forms to students.

However, USI found a number of complications within the system “which led us to call for these reforms,” Ms Harmon said.

“There was a lot of confusion and we were getting a lot of emails and questions.

Some councils were accepting voter-registration forms in bulk and others were not.”

“The voter-registration system is fractured from the root up,” said James Upton, deputy president of UCC Students’ Union.

People were disenfranchised by the referendum process, he said. “Five days before the referendum, I got 132 emails to say that those students were not on the electoral register.”

Mr Upton only received his ballot card two days before the referendum.

Automatic voter registration, which USI is proposing, will “decrease the democratic deficit,” he said.

In addition to online voter registration, USI wants Irish citizens to be able to vote in Irish Embassies and consuls overseas and for voters’ PPS numbers to be used – removing the need for gardaí to stamp forms.

Information on Checktheregister.ie should be updated regularly and the Government should think about sending a booklet to all new voters letting them know how to register as they approach voting age, the union said.

Last week more than 70 members of the Oireachtas attended a USI meeting in Dublin to hear about “education, accommodation, lone parents and all the issues that matter to us,” Ms Harmon said.

“Politicians see there is a ‘youth capital’ now.”

“Young people have issues they care about. Political parties need to listen to young people.”

“Ireland will be a better place if more people get to have a say. Young people are energised and can make a difference.”