Schadenfreude will not help the North get off its knees

Year in Review: Return of Stormont might moderate fury over the mess the DUP got us into 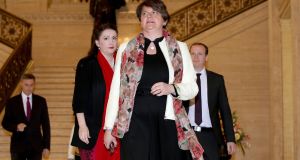 DUP leader Arlene Foster in May 2019. The DUP has been betrayed by Boris Johnson and sidelined by his new government. Photograph: Charles McQuillan/Getty Images

There is an excess of schadenfreude at the moment as regards the Democratic Unionist Party (DUP). “We did warn you,” is a line you hear quite frequently from opposing politicians and many commentators.

Deep in this Christmas holiday season the DUP, Dublin and London and the North’s four other main parties once again are trying to rebuild the huge but politically empty edifice that is Parliament Buildings, Stormont.

With a general election looming in the South it would suit Sinn Féin to see the Northern Executive and Assembly taken off life support after three years and defibrillated back into action. It might demonstrate that Sinn Féin is capable of governing on both sides of the Border – although, that said, there are some republicans who would prefer disarray, as it could hasten the prospect of a Border poll.

But it would be a particular blessing for the DUP to be back in the Northern Executive and Assembly. Arlene Foster would be returned as First Minister, assuming that the report into the Renewable Heating Incentive scheme due sometime in the new year or the calamity of the Westminster general election don’t cost her the DUP leadership.

A return of Stormont would be a distraction from the disaster of Brexit. And there would be no election until 2022, which might allow people to moderate their fury over the mess the DUP got Northern Ireland into.

And it is a monumental mess. In June 2017, when Theresa May was re-elected as British prime minister and became dependent on the DUP’s 10 MPs, the future looked like a bright vista of sunlit uplands, but now it’s a swamp and the DUP are stuck in it.

Back then, the DUP won £1.5 billion from a grateful May to keep her in power. And later, when she needed the DUP to support her withdrawal agreement, there was the prospect of many hundreds of millions more to maintain her in power.

That withdrawal agreement would have kept all of the UK in the EU single market until there was a better deal to replace it. It would have meant no differentiation between Britain and Northern Ireland. It might not be the perfect Brexit as far as the hardline Leavers in the DUP were concerned, but at least the union would be intact.

The DUP’s natural supporters in Northern Ireland, the farmers and the business community, assertively told Foster and Nigel Dodds that they could live with the withdrawal agreement and the backstop because that was 10 times better than the alternative of no-deal, which could be economically disastrous.

Foster and Dodds wouldn’t listen. The backstop would mean checks on some goods coming into Northern Ireland and that could not be tolerated.

So, they brought Boris Johnson over to their annual conference in November 2018 to declare “Junk the backstop” with Dodds joining in the chorus with his “Bin the backstop”.

Here, thought the delegates, was a likely successor to May who wouldn’t let the DUP down. Not half he wouldn’t.

After he got the premiership and as soon as Taoiseach Leo Varadkar opened the door for him with an alternative deal, Johnson greedily embraced it to his chest. Foster and Dodds protested that this would create a border down the Irish Sea.

The DUP has been betrayed by Johnson and sidelined by his new government. The party has lost the prospect of gaining those extra billions that May offered. People at home are annoyed with them over Brexit, over the health crisis, over the absence of a functioning Northern Executive, and over much else besides.

Hardly surprising that the DUP was so badly punished at the election, losing deputy leader Dodds in North Belfast and also South Belfast and failing to take North Down, which looked like a given, and for the first time seeing more nationalist than unionist MPs elected.

Sinn Féin took a hit too in percentage vote. However, were Northern Secretary Julian Smith to call Assembly elections on January 13th, as he has threatened in the absence of a Stormont deal, then Sinn Féin could end up as the largest party. The First Ministership would be in its grasp, while the Alliance and SDLP might also prosper in a ballot.

What a mess indeed for the DUP, and for Northern Ireland. Schadenfreude may be hard to resist but the DUP’s misery won’t help Northern Ireland get off its knees. For that to happen, powersharing must resume and a chastened and humbled DUP must be at the centre of it.