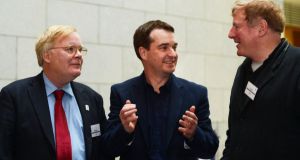 in recent years, they will say the Government “was very successful”, the secretary general of the Department of Public Expenditure has said.

Addressing a Social Justice Ireland conference on how the State will fare after the EU-ECB-IMF bailout, Robert Watt said the measures “were as close to as good as we could do in the circumstances”.

Mr Watt said spending on areas such as health, education and social protection had been protected or increased insofar as was possible, despite Ireland experiencing an almost “unprecedented” economic collapse.

“The social safety net has done its job, where possible, in mitigating the worst impacts of a very significant reduction in private demand,” he said. “If you look at the impact of the incredible reduction in private demand and then look at the impact accounted for in social welfare spending, we have managed to mitigate that to an incredible degree.”

He said the number of teachers and frontline staff in the health service had increased since the economic crash while overall public service numbers fell as a result of “squeezing” management and back office workers. “I think when people look back at this consolidation, they will say the Government was very successful. They focused the adjustment in those areas that had least impact on service delivery.”

Mr Watt said the State could still face economic “shocks” and there was work to be done in reducing the State debt, increasing GDP and keeping interest rates on Irish debt in check.

István Székely, a European Commission representative on the troika team that oversaw the bailout, said EU authorities would continue to make country-specific recommendations for Ireland.

Asked what might have done differently in implementing the programme, Mr Székely said that in hindsight, some things might have been approached in another way. He hoped to use the experience of the last three years to try to give better advice to Ireland as the relationship was long term.