The air froze in the chamber: Walsh’s input was disgusting

Look at the damaged, drug-addled, alcoholic, depressed women around you. Because they are among us. In great numbers, apparently

FF Senator Jim Walsh made his contribution to the debate in the Seanad yesterday. 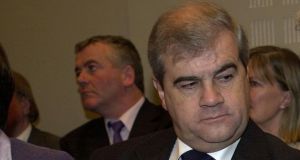 Senator Jim Walsh: He is not a man to mince his words, known for his graphic and gruesome accounts of what is done to foetuses in the womb

Look carefully today at the women around you. All those damaged, drug-addled, alcoholic, self-harming, depressed, sex-addicted, suicidal women. Because they are among us. In great numbers, apparently.

There’s a lot of them about in the world, according to Fianna Fáil’s Jim Walsh, who told the Seanad about the suffering of women who have had terminations.

Where does this leave all those Irish women, travelling day in and day out, to seek what Irish law permits them to obtain in a foreign country but not on sacred home soil?

Estimates put the number of Irish women who have had abortions abroad in the past 30 years at over 150,000. It’s not a true figure, as many who travel prefer not to give an address in Ireland.

As Walsh outlined what can happen as a result of “post-abortion trauma”, one wondered how the fabric of Irish society hasn’t completely disintegrated given the amount of our womenfolk who have had abortions.

Jim is a committed campaigner and has taken his cause on to the floor of the Seanad on countless occasions. He is not a man to mince his words, known for his graphic and gruesome accounts of what is done to foetuses in the womb.

But even allowing for his track record of formaldehyde- infused stories of women destroyed and babies in buckets, yesterday’s contribution to the debate on the Protection of Life during Pregnancy Bill was disgusting.

He said he opposed the Bill – which is highly restrictive and relates only to women whose life is in immediate danger if their pregnancy continues – because it is “anti-woman” and “disempowers women”.

Walsh relied on the writings of two American doctors – stars of the Pro-Life Campaign – to make his case.

He also threw in four examples of “celebrities” who have spoken of their regret at having had abortions – Nicole Appleton formerly of All Saints, Sharon Osborne and, bizarrely, two deceased American actors from bygone times: Shelley Winters and silent screen goddess Gloria Swanson.

No surprise
What he had to say wasn’t surprising – but he surpassed himself yesterday afternoon.

The Senator stressed at the outset that he believes “human life is inviolate from conception to natural death”. That is a legitimate and not uncommon belief.

The very confined parameters of the proposed legislation cut no ice with him.

“So much for claiming the legislation is about protecting women,” he declared, after reading from a booklet by Dr Pravin Thevathasan listing the consequences that may arise for a woman following a termination.

Broken relationships are common. Flashbacks may occur, sometimes when passing hospitals or clinics. There may be alcohol abuse, or drug abuse or “sexual promiscuity and other forms of addiction”.

There were case histories: a woman cutting her wrists 17 years after the event; a 16-year-old on her 10th overdose; a 50-year-old suffering severe depression; and a 25-year-old man who “starts using hallucinogenic drugs to get in touch with his lost child”.

Brass tacks
Then Jim got down to brass tacks, eschewing the “sanitised language” to which people are prone in the abortion debate.

Here’s a summary: the cervix is dilated and a suction pump inserted, limbs are pulled out and, with a clamp, “tear out the spine, intestine, heart and lungs”. That “white gelatinous material” is the brains. “Many times a little face will come out and stare back at you.”

It was as if the air had frozen in the Seanad chamber.

Comforting
“Colleagues, that is what you are being asked to vote for,” stated Walsh, before finishing with a poem about an aborted baby crying on its way to the incinerator. How comforting his words must be to women who have had to end their pregnancies or lose their lives.

Senator Marie Louise O’Donnell was so appalled by what she heard she said she texted Prof John Crown to say something to counter what had just been said.

Jim Walsh made the final contribution to the second- stage debate. Until he spoke, the debate had been fairly reasoned and restrained.

There had been some protests at Fianna Fáil Senator Terry Leyden speaking about “leaving a baby dying on a table in some hospital”.

One Senator dismissed this as scaremongering.

But this was nothing compared to Walsh’s effort.

As the second stage was comfortably passed, it was the uncompromising words of Walsh, in their absolute certainty, that hung in the air.

A chilling comfort to the tens of thousands of Irish women in their times of crisis.