More than 160 people sleep ‘rough ’ in shadow of Leinster House’

Minister for Environment will lead Seanad debate on homelessness 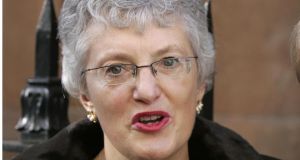 Katherine Zappone: said every Senator could highlight statistics in their own community, and there were 173 people homeless in the South County Dublin Council area

More than 160 homeless people are living “in the shadow of Leinster House”, the Seanad heard following the death of homeless man John Corrie (43) on the steps of a building just yards from Leinster House.

Independent Katherine Zappone highlighted the numbers of people sleeping rough near Leinster House as the Seanad agreed to a two-hour debate tonight on homelessness, to be introduced by Minister for the Environment Alan Kelly.

Ms Zappone said every Senator could highlight statistics in their own community, and there were 173 people homeless in the South County Dublin Council area. She said “either the Government analyses of these problems are wrong or incomplete or the political ideologies that direct its solutions are insipid, vacuous of original vision or simply outdated”.

She thanked Independent Gerard Craughwell who put the motion for a Seanad debate forward, and agreed that allowing 24 hours before the discussion would give Senators time to prepare their remarks.

Fianna Fáil’s Marc MacSharry pushed a vote in the House to call the Minister in immediately to debate the issue. He said the crisis was such that it demanded “immediacy rather than to be scheduled as a matter for debate tomorrow evening”.

He said “a man lost his life a matter of yards from where we speak today, and it is unacceptable that we will again have a day’s outrage and resort to business as usual”.

However, Labour Seanad leader Ivana Bacik said “it is very easy to indulge in manufactured outrage but I do not think that is an appropriate response to this tragedy”.

She described as a practical initiative the Minister’s plan to convene a special forum on homelessness on Thursday.

Independent John Crown criticised local authority spending priorities. He said Dublin City Council was spending money on an interpretive centre for Bull Island. “The entire country is starting to resemble a bull island if this is the scale of priorities when people are freezing on the street.”