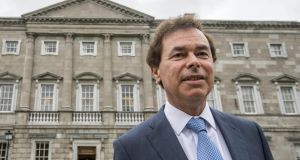 Alan Shatter made a brief appearance in the Dáil canteen on Tuesday night.

Around the same time, the former minister for justice was appearing in the inboxes of political correspondents, along with the text of a speech he made to his local constituency organisation in Goatstown.

A most thoughtful gesture.

Shatter’s Goat Declaration (for it was a momentous occasion) was eagerly seized upon by the commentators.

Alan had much to say about the state of affairs in his erstwhile office. Certain matters aren’t progressing to his satisfaction at the Department of Justice, not least in the area of the Children and Family Relationships Bill, a matter very close to his heart. (Although not as close to his heart as his own political skin, which demanded even more of his attention in the tortuously long road to his eventual resignation.)

Alan is “greatly concerned” that the draft Bill hasn’t yet been published by his successor, Frances Fitzgerald, and warned that the slow progress of his legislation now threatens to derail the same-sex marriage referendum.

The new regime in justice is livid with him.

Over the last couple of days, Shatter has been telling anyone who cares to listen that, if the Children and Family Relationships Bill is not enacted well in advance of the May vote, this “will facilitate those opposed to constitutional change generating controversy and muddying the waters and misleading people into voting no”.

Mind you, they weren’t talking about this terrible injustice visited upon the former minister in the Dáil yesterday, when the pace slowed considerably after the previous day’s dispiriting treatment of the Fatal Foetal Abnormalities Bill.

Huge monster meeting Highlight of Leaders’ Questions was a discussion on small rural schools between the Taoiseach and Kerry South Independent TD, the lesser-heard Tom Fleming.

Tom brought news of a “huge monster meeting in Caherciveen on Monday night” about the fate of these one-teacher schools, painting “a very dismal picture of boarded-up schools and many others that are in danger of facing a similar fate in the very near future.”

Enda was most supportive.

“I attended a two-teacher school many years ago.”

Micheál Martin snorted. “I’d say it was a good few years ago.”

The Taoiseach said he is acutely aware of the problem, but he doesn’t support “the concept of one-teacher schools.”

He feels they aren’t in the children’s best interests as numbers can be very small and the schools don’t have the facilities and competitive peer activity we would expect now.

“It’s not like it used to be 100 years ago, when schools were built within walking distance. It is all very different now. Population numbers are way down in many areas.”

He hopes that something can be done about this, but stopped short of telling rural residents to go forth and procreate.

Gerry Adams was very quiet during these exchanges. Probably still nursing his bruised feelings. He reminded the Taoiseach that he crossed the floor last month and handed him a letter he got from Hiqa in relation to recommendations made about patient safety.

Bad Enda – he never writes, he never phones. He promised to send a letter immediately to the Sinn Féin leader.

But back to Alan Shatter and his latest bout of noises-off. Where exactly is his Bill, the one he says is making dangerously slow progress? He kicked it off in November of 2012 and said he hoped to see it enacted by the end of 2013.

That didn’t happen by a long shot.

And by then, the Great Unpleasantness had started for Alan. By May of last year, when he had to leave the Department of Justice, an Oireachtas committee was still considering a raft of submissions.

But Shatter didn’t seem aware of this.

So he just had to say something. He said it to his FG flock in South Dublin, and he said it in his email to the hacks and then he went on the radio yesterday to further repeat himself on Newstalk and on RTÉ.

He may not be minister anymore, but he’s still a busy man. Perhaps this is why he didn’t attend the briefing on the Bill for the Government parties on Tuesday. Opposition deputies were similarly briefed yesterday. The notification of the briefing was dispatched to Fine Gael deputies last week.

Maybe Alan didn’t get the memo.

Still, at least the Government must be happy to have his support for the Children and Family Relationships Bill. Although, despite all the airtime and opportunity, he just didn’t get around to selling it – and more importantly, the same-sex marriage referendum – yesterday.