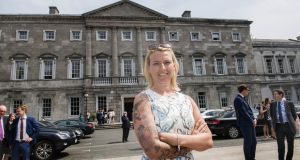 She said she found some of the comments made by the Minister for Social Protection concerning and divisive.

“I do not make this claim lightly because I do not like attacking people personally, but I have a fear we are moving into a time where we are going to be looking at a taoiseach who is very classist in his nature,’’ said Ms Ruane.

As the Fine Gael leadership race spilled over into the Seanad on Wednesday, Ms Ruane said it was the first time in her life she felt “a little bit of fear’’ about what was coming in terms of the next taoiseach.

“I was also close to thinking I would nearly sign up to Fine Gael just to vote against him and put a number one beside Simon Coveney’s name . . . and that is saying something,’’ she added.

Fine Gael leader of the House Jerry Buttimer said he had an application form. “The Senator would be welcome to join,’’ he added.

Ms Ruane said she hoped she was wrong and would remain open to seeing what Mr Varadkar did during his term of office. But she was very concerned and disappointed by many of his comments throughout his campaign, she added.

Fianna Fáil Cathaoirleach Denis O’Donovan said: “I believe that, under the Fine Gael constitution, with which I am not too au fait, the Senator would have to wait 12 months to get clearance.’’

Labour Senator Ivana Bacik said her party would be happy to have Ms Ruane join them.

Earlier, Sinn Féin Senator Rose Conway-Walsh referred to Mr Varadkar’s commitment to represent people who get up early in the morning.

“What about the carers who have been up all night caring for relatives because they cannot get community care, the people with disabilities who have to beg for services and the many people in the west who cannot find a job, including the 608 people who applied for eight jobs within Mayo County Council?’’ she said.