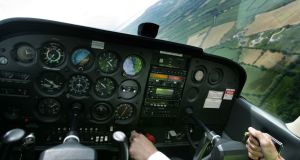 File photograph of the cockpit of a training aircraft at the Pilot Training College of Ireland, Waterford.

The lives of dozens of young trainee pilots and their families were “devastated” when a pilot training college in Waterford collapsed five years ago after they had paid large sums in fees, an Oireachtas committee has heard.

Waterford-based Pilot Training College of Ireland (PTC) was wound up in 2012 with debts of €9 million, most of it owed to students. Kazakhstani national carrier Air Astana was its largest corporate creditor.

The Joint Committee on Transport, Tourism and Sport heard a presentation by Brian Kealy and Martina Kealy of the Pilot Training Action Group, established to support those affected by the company’s collapse.

They told the committee that, while they appreciated that PTC had been a private company which unfortunately had ended its life with no assets, they wished to highlight the “failure of a public body, namely the Irish Aviation Authority [IAA], to act much earlier”.

Ms Kealy said at least one family had downsized their house to afford the additional fees to allow their son to continue his pilot training. Another family “nearly had their house repossessed” and had a “major row” with a bank.

One couple had been under such financial pressure since their son’s “dreams were dashed” that their marriage broke up.

Another student had suffered a “stress-induced seizure” and would never be able to fly again, she said.

The action group said a range of complaints had been made by students and their sponsors to the Garda Bureau of Fraud Investigation, but no action had been taken to date. Mr Kealy also told the committee the group had contacted the Office of the Director of Corporate Enforcement, but had never received a response.

The 60 or so students represented by the action group were among those most impacted and were owed €2.6 million. In all, some 300 students were hit by the closure.

Mr Kealy told the committee the group believed the IAA had shown “excessive forbearance in allowing PTC to continue to operate”.

He said Freedom of Information disclosures showed the aviation authority had reviewed the company accounts of Shemburn, the parent company of PTC, which had a €1 million reported net worth in December 2010. It had not reviewed the group accounts covering its subsidiaries as well.

“A review of PTC’s own accounts would have shown a €2 million deficit at December 2010 and €3.6 million owed to students and a serious qualification of the accounts stating ‘these conditions indicate the existence of a material uncertainty which may cast significant doubt over the company’s ability to continue as a going concern’,” Mr Kealy said.

He noted the director of safety regulation at the IAA had told the committee in October 2012 that many flight training companies were “like Ponzi schemes”.

“A review of the PTC accounts would have shown this to be the case,” he said.

IAA chief executive Eamonn Brennan told the committee in 2012 that the body regulates flight-training organisations in accordance with the European Union regulations for safety.

Flight training organisations were not bonded companies either in Ireland or the United Kingdom.

Mr Brennan said the aviation authority examined whether such organisations had resources sufficient to maintain their simulators, aircraft and so on but did not consider the financial viability of such a company.

'Beautiful soul with bright career ahead' – tributes paid to stabbed teenager 17:46
Tourism sector calls for international travel to resume in second half of 2021 17:29
Most water extraction to go unregulated, environment groups warn 17:22
Woman sues Facebook over hacking of her account 17:48
Zero Covid strategy must be adopted to avoid recurring lockdowns – scientists 16:53