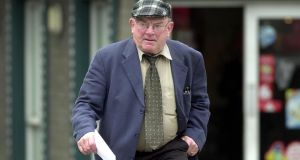 Mr Healy-Rae, who died in Kerry General Hospital, in Tralee, on Friday, had been ill for some time.

He served in the Dáil from 1997 to 2011, and twice supported Fianna Fáil-led governments in return for constituency projects. He was succeeded in the Dáil by his son, Michael.

A Fianna Fáil councillor and activist for many years, he broke with the party in 1997 when he failed to secure a nomination to contest the general election.

Fianna Fáil leader Micheal Martin said he was “a unique politician and he captured the imagination of the people of Kerry and across Ireland with his storytelling and his sheer determination to improve services in south Kerry’’.

Fine Gael TD for Kerry North and Minister of State for the Diaspora Jimmy Deenihan said the county had lost “a committed and a passionate public servant’’. He described Healy-Rae as “a long-standing, genuine friend’’ who would be dearly missed.

“There were always bits of roads, bits of bends, bits of housing . . . and all the things that were important to the local people,’’ he added.

Former tánaiste and Labour leader Dick Spring said: “He was a stalwart for Kerry. He was a man who worked hard, long and faithfully for the people of Kerry. He shall be missed.’’

Fianna Fáil cathaoirleach of Kerry County Council John Brassil said he was fortunate to have served on the council with Mr Healy-Rae, who had gone out of his way to make him feel welcome, and gave him valuable advice.

He said the word “legend’’ was used too often, but Mr Healy-Rae was a character.

“He left a lasting impression on everyone he met,’’ he said.

Killarney-based Fine Gael Senator Paul Coghlan said Mr Healy-Rae was a very good friend for a long time, despite their political differences. “He was an ardent campaigner for everything he believed in.’’

Mr Healy-Rae will be waked at Healy-Rae’s bar in Main Street, Kilgarvan, on Saturday and the removal will take place on Sunday.

He will be buried in Kilgarvan on Monday after Mass at noon. He is survived by his wife, Julie, from whom he was separated, his partner, Kathleen, sons Michael, Danny, John and Denis, and daughters Rosemary and Joan.