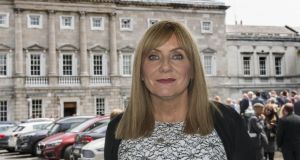 Senator Frances Black said the Bill was about respect for international law and standing up for the rights of vulnerable people. Photograph: Brenda Fitzsimons

The Government has opposed a Seanad Private Member’s Bill calling for a prohibition on goods and services from illegal Israeli settlements.

Tánaiste and Minister for Foreign Affairs Simon Coveney said Ireland would continue to support action at European Union level which differentiated between settlements and Israel.

He told the Seand that issues of international trade fell under the common commercial policy of the EU.

“While all the EU member states oppose settlements, and many feel as strongly as Ireland, the legal position is that no such member state has yet taken the step to take action on a national basis on this issue,” he added.

The Control of Economic Activity (Occupied Territories) Bill 2018, moved by Independent senator Frances Black, would make it illegal to purchase goods and services from Israeli settlements in the occupied Palestinian territories.

Mr Coveney said the relentless expansion of Israeli settlements on Palestinian territory was unjust, provocative and undermined the credibility of Israel’s commitment to a peaceful solution to a conflict everybody wanted an end to.

He said a considerable amount of work had gone into drafting the Bill and he knew it was being put forward in a spirit of wishing to contribute to the well-being of the Palestinian people.

It also came from a desire to bring an end to the construction of settlements on land in the occupied Palestinian territory beyond Israel’s international recognised border, he added.

“These are objectives which I and the Government fully share,” said Mr Coveney.

Ms Black said the Bill was about respect for international law and standing up for the rights of vulnerable people. “It is a chance for Ireland to state strongly that it does not support the illegal confiscation of land and the human suffering which inevitably results.”

Ms Black said they were dealing with a breach of international humanitarian law where one state had occupied another. “It is about the construction of illegal settlements beyond internationally recognised borders as a means slowly to confiscate land and natural resources,” she added.

Ms Black said such settlements violated the prohibition of the fourth Geneva convention on the transfer of civilian populations into occupied territories and constituted a war crime.

“Importantly, they also break domestic Irish law,” she added. “Despite this, Ireland continues to provide economic support through trade in settlement goods.”

She said the trade in settlement goods was fundamentally undermining the search for a peaceful solution. “In the occupied Palestinian territories, people are forcibly kicked out of their homes, fertile farming land is seized and the fruit and vegetables produced are then exported to pay for it all.”