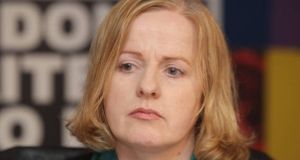 Ruth Coppinger: she cited the success of the anti-water charges campaign, and said it had been organised totally through social media. Photograph: Getty Images

The Government has lost a Dáil vote on a Fianna Fáil Bill to make it a crime to use automated social media accounts to manipulate online political debates and influence campaigns.

Fine Gael and its Independent Alliance and Independent Ministers were defeated by 58 to 56 votes in the wake of the debate on the Online Advertising and Social Media (Transparency) Bill, introduced by Fianna Fáil TD James Lawless.

The legislation also targets the Government’s €5 million Strategic Communications Unit or “spin unit” as the Opposition has dubbed it.

Opposition TDs have been particularly critical of advertising involving Taoiseach Leo Varadkar and Government Ministers, and claim they are using State money to promote Fine Gael.

The defeat means the Bill goes to Committee Stage, but it is unlikely to progress further. Although the vote is an embarrassment it does not have any real impact as the Government is not obliged to process the legislation.

The Government has suffered at least 30 defeats in votes on Opposition Bills and motions.

Solidarity People Before Profit TDs were unlikely supporters of the Government. During debate on the Bill, Solidarity TD Ruth Coppinger said social media had become a resource for ordinary people, “for protest movements and for political discourse that is not allowed or permitted within the mainstream media”.

She cited the success of the anti-water charges campaign, and said it had been organised totally through social media.

Minister for Communications Denis Naughten said he could not accept the Bill because while he acknowledged it was aimed at reducing the risk of external actors seeking to create false political campaigns, it would likely “make the situation worse rather than better”.

The legislation gave him as Minister significant powers which could be “implemented without recourse to anyone else with the simple stroke of a pen on the cusp of an election”.

“That is a significant power to place in the hands of any one individual,” he said.