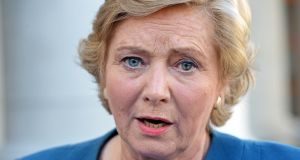 Frances Fitzgerald: said to begin a review of the legislation at too early a point might result in an inconclusive report

Legislation which criminalises the purchaser of sexual services rather than the seller will be reviewed within three years in line with a similar law in Northern Ireland, Minister for Justice Frances Fitzgerald has said.

She told the Dáil the North committed to reviewing its legislation after three years, and it would be useful to have a comparable period to measure the impact of the offence in this jurisdiction.

Ms Fitzgerald was speaking during ongoing debate on the Criminal Law (Sexual Offences) Bill which also strengthens laws to combat child pornography and prevent the sexual grooming of children. It also updates provisions on incest and indecent exposure.

A number of TDs called for a shorter review period and to include offences under existing legislation, but the Minister said she was recommending three years “because it is pragmatic and will afford the best opportunity to ensure that the legislation has been embedded for a sufficient period to measure its impact adequately”.

She said to begin the review at too early a point might result in an inconclusive report.

She said focusing on the single offence of criminalising the purchase of sexual services rather than including it in a large review of trafficking legislation and prostitution legislation generally, they could forensically assess the impact of the offence with less risk of minimising it with a larger review.

The amendment was accepted by 103 votes to 14. AAA-PBP Deputy Ruth Coppinger criticised the failure to make the review broader.

She also called for financial, language and other supports to be put in place to help women in prostitution with an exit strategy.

She said criminalisation of the purchase of sex was being introduced to send a message from society that buying sex was not acceptable, “but if there are no real ways for people to get out of prostitution, they have to remain in it”.

“The question arises that if we criminalise the purchase of sex without ways and avenues to help people get out of prostitution, we may make it less safe.”