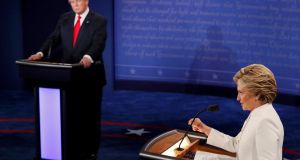 During the US election, thousands of Russian-linked bots posted anti-Hillary Clinton tweets seconds apart in alphabetical order of their made-up names, according to a New York Times report. Photograph: Reuters

The use of internet “bots” to manipulate online political debates and influence campaigns would become a crime under a Private Members’ Bill to be introduced in the Dáil on Wednesday.

Bots are automated social media accounts which purport to be actual individuals but are in reality controlled by an anonymous third party pursuing a specific agenda.

They can be used to give the impression that a particular political belief is more popular than it really is, to attack and harass ideological opponents, or simply to sow confusion and cynicism about the political process.

There is evidence that bots were used in last year’s Brexit referendum and the US presidential election.

Online political advertising is not currently subject to the same level of regulation as offline or print political campaigns, where ads must clearly carry information about who paid for them.

Mr Lawless cited the US and UK as examples of why Ireland needed new legislation. “As a practising politician I engage online daily. I’m used to the cut and thrust of online debates,” he said. “But this problem has grown a lot.”

Twitter, unlike Facebook, does not require the use of a real name and does not prohibit automated accounts.

During the US election, thousands of Russian-linked bots posted anti-Hillary Clinton tweets seconds apart in alphabetical order of their made-up names, according to a New York Times report.

Such mass attacks can push particular posts or articles into “trending” queues, so they show up more prominently in the feeds of unsuspecting users. “It’s not that difficult to play the algorithms,” said Mr Lawless. “You can manipulate them by using bots to boost organic traffic.”

In September, Facebook disclosed it had shut down several hundred accounts it believed were created by a Russian company and used to buy $100,000 in ads pushing divisive issues during and after the American election campaign.

For the past several years the company has resisted calls for greater transparency on who its advertisers are and who they target but it has now promised to introduce new political ad transparency tools next month in Canada, with a goal of having them in place in the US next year.

The bill being introduced this week would require anyone who seeks to purchase online political advertising to provide information on the person or entity who is paying for the ad, along with a description of what audience is being targeted.

The online platform on which the ad appears will then have to display this information in a “clear and conspicuous manner”. Breaches of the law would be punishable by a fine of up to € 10,000 or up to five years’ imprisonment.

Mr Lawless said he hoped this provision would provide the information that would give journalists and other “the tools to do a bit of digging” into who was funding such campaigns.

The bill would also make it an offence to use a bot to create multiple online presences directed towards a political end to present to a user of an online platform as an individual account or profile.

In a move clearly directed at the Government’s new Strategic Communications Unit, the bill also provides that “online political advertising shall not be paid for from monies provided out of the Central Fund or the growing produce thereof or from monies voted by the Oireachtas”.

Asked whether this might be viewed as a partisan issue when he was seeking cross-party support, Mr Lawless said there were legitimate concerns about the scope of the unit’s activities and whether some of these were party political.