While the Government was away from Kildare Street, the seagulls attempted a coup 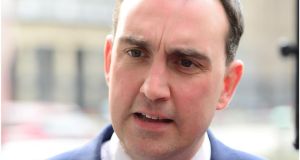 Sligo was to the fore on the political radar this week, what with the Cabinet decamping for a day to Lissadell House and Senator Marc MacSharry turning on the histrionics at the banking inquiry.

While the Government was away from Kildare Street on Wednesday, the seagulls attempted a coup.

There was consternation in the Leinster House 2000 annex when one young feathered warrior got in through the automatic windows in the roof and led the staff on a merry dance.

Meanwhile, staff in the Taoiseach’s department in Government Buildings received an email from the authorities.

“Staff in Dept/Taoiseach have been circulated the following notice: If windows need to be opened during meetings in Room 308, please ensure that you CLOSE them when you are leaving, as we are experiencing problems with birds getting in and destroying the room . . .”

The gull situation reached crisis point in the Seanad on Tuesday, when Senators met for the last time before the summer recess. They come back on September 23rd.

Even though the Dáil wasn’t sitting – thus affording members of the Upper House a rare chance to emerge from the shadow of the TDs who usually get all the media attention – Senators didn’t exactly rush to make themselves heard.

Before shutting up shop in the afternoon, they had to vote on the Bill proposing legislation to enforce the payment of water charges. Just over half of the Senators were there to vote.

The seagulls got the rest of them. They taste like duck, apparently.

Meanwhile, MacSharry’s noisy grandstanding at the banking inquiry provided some light relief, if not any light, on Wednesday.

“Everyone leaves their jerseys at the door, Taoiseach,” he told Enda Kenny, keeping up the threadbare pretence that the inquiry has not become a vehicle for the political parties to score points off each other.

The Taoiseach had just said he presumed the Government’s majority on the committee was not a factor in how business was conducted.

Enda continued where he had left off the day before in Lissadell, praising his Government in advance of the election.

Except this time he was talking up his role as leader of the opposition in order to burnish his credentials as Fine Gael’s first two-term taoiseach.

How well he remembered that meeting with members of the board of Anglo Irish Bank, when they were trying to convince him and his finance spokesman, Richard Bruton, everything was hunky-dory with the balance sheet.

He told the Anglo boys: “I’m not a banker but I’m hearing on the streets that things are not as you’re presenting them here.”

Even then people on the street were coming up to Enda telling him things that reflected remarkably well on Enda.

But at least he tried to give the impression he wasn’t taking a political approach to the inquiry.

The gurning MacSharry, as he barked questions at the witnesses, jumped straight in to fight for Fianna Fáil’s honour.

One of his finest remarks was to Pat Rabbitte, who had replied to a question about when Labour looked for reductions in expenditure by saying they had opposed a number of FF spending decisions.

“For example, I was very prominent myself,” began Pat, modestly, “almost alone in the Dáil, in terms of the Bertie bowl . . .”

Marc interrupted him. “Yes, so that’s one issue now.” Pat finished his sentance: “ . . . which was a huge expenditure issue.”

But that wasn’t what the Senator wanted to hear. “It’s the overall thing,” he said, “as opposed to the individual calamities.”

The Taoiseach seemed in good spirits on Thursday despite MacSharry’s attempts to bludgeon him into some sort of confession.

But then he was in great form at lovely Lissadell the previous day.

After he had thanked his generous hosts, Eddie Walsh and Constance Cassidy, Enda expressed his gratitude to the people living near Lissadell House, who “made an effort in the presentation of the front of their houses and gardens”.

He must have meant the hanging baskets and window boxes along the route.

But lovely as they were, there was nothing to indicate Sligo’s houseproud citizenry had put them out to welcome Enda.

After their Lissadell wind-down the Cabinet won’t get much of a break. There’s a general election to be fought.

The Dáil returns on September 22nd, the first day of the ploughing championships. Farmers, be afraid. Electioneering politicians are more dangerous than a stampede of love-hungry bulls.

Which brings us to De Udders. We thought Lucinda Creighton’s new party, Renua, was part of a loose group of Dáil Independents the Ceann Comhairle quaintly calls “The Others”.

Now one of their TDs, Billy Timmins, has applied for membership of the technical group.

Can the Renudders do that?

Birthday boy Kelly gives flash of this cards as he keeps councillors sweet You know you’re getting old when policemen and Ministers start looking younger.

Take Labour’s deputy leader and Minister for the Environment Alan Kelly. (No, you can’t. That’s just a figure of speech).

He celebrated his 40th birthday last Saturday night with a huge bash in his Tipperary home village of Portroe.

Tánaiste Joan Burton was among the guests at the very picturesque Larkins Bar and Restaurant, on the shores of Lough Derg, although the party was primarily for family, neighbours and friends of the birthday boy.

Humphreys was a mere senior counsel last Saturday. He was appointed a judge of the High Court on Wednesday.

That’s not to say that the political turnout was relatively small. Kelly assiduously cultivates the Labour grassroots – a powerful voting block when it comes to leadership contests and the like.

We hear some of his parliamentary party colleagues who were not on the guest list were intrigued to discover that a large selection of county councillors from all over the country were in attendance and enjoyed the festivities mightily.

They couldn’t help but wonder if the pragmatic Kelly, who has never hidden his leadership ambition, had taken the opportunity to get in some strategic planning along with his slice of cake, a very nice cake iced to resemble the jersey of his local GAA club.

Depending how Labour fare after the rapidly approaching general election, there might be another change at the top and if so, one of the candidates would be very well got with certain councillors and their crews.

It was a great evening, by all accounts. Larkins is a renowned spot for traditional music and the band Tradstoone entertained the big crowd. There was also the obligatory sing-song.

As we know, FAI chief executive John Delaney likes to sing. He got himself into a spot of bother last November when he was filmed singing a republican ballad (badly) in a Dublin pub after a Republic of Ireland soccer match.

It hasn’t put him off singing in public.

As the delighted crowd in Portroe discovered last Saturday night.

There was a lot of hype around RTÉ’s docu-drama Charlie when it was broadcast back in January.

The opening episode of the three-part drama on the life of former taoiseach and Fianna Fáil leader Charlie Haughey was watched by over 700,000 viewers.

Given the renewed interest in one of the most controversial figures in Irish politics, publishers Poolbeg decided to issue The Boss – a gripping account of Haughey’s 1982 gubu year in government – in ebook form.

Written by journalists Joe Joyce and Peter Murtagh in 1983, it chronicles this extraordinary period when Haughey was in power.

This dark tale of political intrigue has more twists and turns than the new Tayto rollercoaster.

Sales have been steady.

But so too have the complaints. Stung by charges that they might have bothered to proofread their opus before “rushing it out” 30 years ago, Murtagh and Joyce have been spending the past few weeks weeding out the typographical errors caused by the digitisation process.

Some of them are quite good actually, particularly where names are concerned.

Here’s some of them:

Neil Blaney, the Donegal political firebrand who played a central role in the Arms Crisis, is “Neil Blamey”. Jim Kemmy, much-loved Limerick socialist, is referred to throughout as “Emmy”; Donogh O’Malley, the Fianna Fáil minister who brought in free second-level education in 1969, becomes the rather exotic “Dingo O’Malley”.

And given what would happen many years down the line to Fianna Fáil’s rising star at that time, Bertie Ahern aptly transmogrifies into “Bertie Ahem”.

The software was always going to have a problem recognising the Fianna Fáil Ard Fheis, where a lot of skulduggery went on in Mr Haughty’s day. It made a valiant attempt, though. “Arid Fees” has a nice ring to it.

The authors hope to have a corrected version up online in no time.

Which is an awful pity.