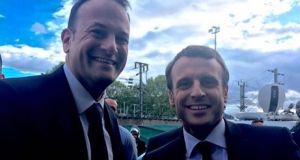 Leo Varadkar and Emmanuel Macron at an election rally in Paris.

The Minister for Social Protection attended the rally in a personal capacity. It was held a week before polling, was attended by thousands of people.

Mr Varadkar (38) met the centrist candidate – who is 39 – towards the end of the rally and posted a photograph of the meeting on his Twitter and Facebook accounts.

In the Twitter post, he wrote: “Bon chance M Macron. For a stronger France is a stronger Europe. ”

Later on Monday, Mr Varadkar said it was “a privilege to attend Macron’s rally in Paris. He’s a man whose character and values I admire.”

He added that instead of pandering to Marine Le Pen’s “nationalism, statism and illiberalism as some have, he has done the opposite and doubled down on defending our values through a pro-Europe, socially and economically liberal campaign”.

“He speaks confidently and hopefully about the future and how we can change globalisation, Europe, business and our own countries to work better for citizens. He rejects philosophies of nationalism and fear that are nostalgic about a better or greater past that never really existed.”

The Fine Gael leadership hopeful said “the political division in the world is no longer one of left versus right. It’s increasingly been progressivism and open on one side versus regressivism and closed on the other.”

Earlier at the rally, Mr Varadkar also met the former presidential candidate Ségolène Royal and tweeted that there was an “amazing atmosphere” there.

Mr Macron, the front-runner, will face Marine Le Pen, leader of anti-immigrant party Le Front National, in the second, decisive round of the elections next weekend.

Polls show him running well ahead of Ms Le Pen with French voters.