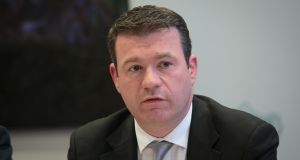 Minister of Environment Alan Kelly: “While we won’t meet the 2020 targets we are in a trajectory or a line that is going in the right direction.” Photograph: Gareth Chaney Collins

Minister for Environment Alan Kelly has said it is no secret that Ireland is not going to meet the EU greenhouse emissions targets for 2020.

Mr Kelly has asserted the targets set by a predecessor as minister (John Gormley of the Green Party) were unrealistic but said that Ireland was now “catching up very quickly”.

“While we won’t meet the 2020 targets we are in a trajectory or a line that is going in the right direction.”

In an interview in advance of the UN global summit on climate change in Paris in December (known as COP21), he said that Ireland would play a significant role at the talks, as part of the EU block.

The EU has committed to a 40 per cent reduction by 2030 ahead of the Paris talks. Mr Kelly said it was a challenging target.

He said that there was understanding in the EU that Ireland had come through a tough recession and that should be recognised in the targets set for each State after the overall target has been ratified.

He said a lot would hinge on EU partners understanding Ireland’s situation. He said capital investment to adapt and mitigate was now beginning at a level that was required. He said this could not happen when times were tough.

He also pointed to the significance of agriculture to the Irish economy which he said put us out of kilter with other member states. Doubling the amount of afforested land in the State from about its current 7 per cent levels was also a key component of the strategy, he said.

Defending farmers as “some of the best environmentalists” he argued that the grassland-based nature of Irish agriculture was more environmentally friendly than any alternative.

He said that more measures would also have to be taken in transport and construction. Technology will be key issue in transport, with more electric and semi-electric cars coming on stream.

Asked about the suggestion made by another former minister Noel Dempsey, while in office, of a congestion charge for Dublin he said it was not warranted and was “not under discussion in any shape, way or form”.

On the construction side where regulations have been ignored or flouted, he said he agreed with the concept of “doing something about rogue builders and blacklisting them”.

He said that technically it would be difficult to implement but talks were ongoing.

Asked did he think there would be a deal at COP21, Mr Kelly said the big question would surround the approach of the Arab states; India; China; and some South American countries.

He said he believed the target of containing global warming to 2 degrees was achievable at Paris.

“It’s a challenge but I think we can reach it,” he said.

Mr Kelly has been reviewing the rules around the location of wind farms and there are reports that he is set to increase the distance between turbines and the nearest occupied dwellings from the present distance of 500m.

There have been concerns expressed that if too restrictive the new rules could effectively shut down the industry.

He rejected that assertion: “I have shown on maps of Ireland the consequences of the proposals I am putting forward and I am confident that we will have loads of capacity for wind.”