Foster and McGuinness back substance of Stormont pact 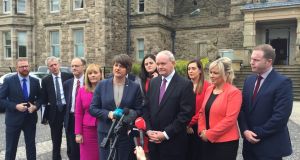 Northern Ireland’s political leaders have denied their agreed framework programme for government is nothing more than an “apple pie” list of vague aspirations.

The Democratic Unionist and Sinn Féin Ministers insisted the approach of setting a general framework, and then conducting a public consultation to help shape the ultimate policies, was a more “thoughtful” way of governing. They added that it was one that ensured the maximum degree of community buy-in.

Mrs Foster and Mr McGuinness said such an “inclusive” process had worked to great effect in Scotland.

The new-look Stormont Executive agreed the draft plan on Thursday during its first meeting.

She added: “The whole idea is we take our ideas out to the public and they then engage with us as to how we can deliver that together.”

The DUP leader said definite targets would be set when the public consultation exercise ended and the document was aligned with December’s budget.

“It’s a new start, we are very much looking forward to it, we hope it’s a time for more thoughtful politics in Northern Ireland and we look forward to the engagement that’s about to take place,” she said.

This month’s Assembly election has ushered in a new era of politics in Northern Ireland. Former executive junior partners, the Ulster Unionists, SDLP and Alliance, all declined the chance to enter the powersharing administration, instead opting to sit on the opposition benches.

The change is set to significantly alter the dynamic at the executive table and in the Assembly debating chamber.

The only Minister at the Executive who is not a DUP or Sinn Féin member is Independent unionist Claire Sugden, who stepped up to resolve the main parties’ quandary on who would fill the politically contentious justice portfolio.

The erstwhile junior executive partners have been among the most critical of the framework approach.

Mr McGuinness said the sceptics had “ignored the purpose of what we are trying to do”.

“They argue we as politicians should decide what the public should get. Our approach is different – what we are asking the public to do is be part of putting the programme for government together.”

He added: “This isn’t apple pie – the whole purpose of it is to ensure that over a very short period of time we will have a situation where there is a very dynamic programme for government but based on what the public want to see.”