Fine Gael TD Brian Walsh will not contest next election 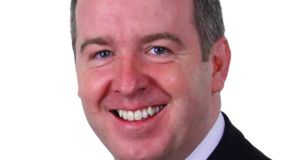 Fine Gael TD Brian Walsh is set to step down from his position.

Fine Gael TD Brian Walsh has announced that he will not contest the next general election on medical grounds.

Mr Walsh (43), who represents the Galway West constituency, said “with deep regret” he had decided to withdraw his candidacy “in accordance with medical advice.”

“I have been experiencing health problems for some time, which have resulted in hospitalisation on two occasions recently.

“I have done everything possible to resist making this decision and had hoped to overcome my condition in order to be able to continue.

“But in recent days, it has become clear that I have no choice but to accede to medical advice and withdraw my candidacy in the forthcoming general election.

“While it is with great sadness that I must step back from this role, I take solace from the fact that this will enable me to spend more time with my family.

“I wish to thank my wife, Fiona, my daughters, Lisa and Amy, my family and supporters, and the people of Galway West for their backing and their trust.

“It has been a great honour to represent the people of this constituency at national and local level.”

Mr Walsh’s move may allow fellow party member John O’Mahony to hold on to his Dáil seat in the next election, after switching to the Galway West constituency.

Mr Walsh, a native of Mervue in Galway city, was first elected to Galway City Council in 2004, before serving as mayor of Galway between 2005-2006.

He was elected on the 12th count, after receiving more than 5,400 votes.

He lost the Fine Gael whip in 2013 after voting against the Government’s Protection of Life During Pregnancy Bill.

He was re-admitted to the Fine Gael parliamentary party in April 2014 .

Mr Walsh worked in banking before moving into politics.