Full speech by Taoiseach at launch of ‘The GPO: Witness History’ on Good Friday 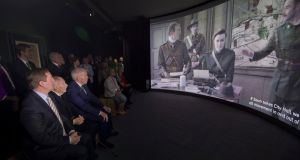 I am delighted to be here this morning with Minister Heather Humphreys to launch this significant exhibition – ‘The GPO: Witness History’, a key element of the Ireland 2016 Centenary Programme.

It is an honour to have Liam Cosgrave joinus here today. His father, WT Cosgrave, formally reopened the enlarged GPO in 1929.

It is fitting that we are gathered here today in this historic building “witnessing history” so to speak as it was on this site, 100 years ago that Pádraig Pearse read aloud the Proclamation of the Irish Republic in an act of brave defiance that lit the touch paper leading to the culmination of centuries of struggle for Irish freedom.

As the volunteer headquarters during the Easter Rising and focal point of the British counterattack, there is perhaps no more iconic landmark in the country that so poignantly reflects the courage and determination of those brave men and women who came out that Easter to challenge the British empire.

It was here that Pearse, Connolly, Plunkett, Clarke and Mac Diarmada directed the fighting across the city and the country while the burning building collapsed around them under the weight of fire from the ever encircling British forces.

I am delighted to be able to announce the opening of An Post’s ‘The GPO Witness History’. This amazing new exhibition will give visitors a real sense of what it was like to be in the General Post Office and Dublin a century ago and to reflect on how those days shaped Ireland over the following 100 years.

Like Dublin Rising, an initiative which I launched in partnership with Google, that allows users to explore the streets of Dublin as they were in 1916, this exhibition will use the latest immersive technology to bring history to life. It will help to remind us that the men and women who lived in the city and who fought and died in the Rising were not just names and photographs in our history books but were real people with the same hopes and fears as all of us today.

During this time of reflection and commemoration, we must also never forget that as well as volunteers and British soldiers, many hundreds of civilians also lost their lives in the fighting. As well as the exhibition, the space will also feature a memorial to the 40 children killed by gunfire during Easter Week 1916.

The memorial, ‘They are of Us All’ by renowned Dublin artist, Barbara Knezevic is composed of the very black limestone and steel that was dug out of the ruins of Jacobs Biscuit factory with each child being represented by a stone.

The Legacy of Freedom When I launched the Government’s programme of commemorative events, I stated that I wanted 2016 to be a year in which we remembered our shared history on these islands; a meaningful opportunity to reflect on our achievements and our failings, and that we take the chance to imagine our future.

From the ashes of the Rising, the subsequent War of Independence, and Civil War arose a free and democratic Irish State. The foundation of the Irish Free State and the tradition of Irish men and women working together for the common good of our people is a legacy that we can be most proud of.

Ireland has since enjoyed one of the longest periods of unbroken democratic governance in the world. Between a world war, devastating economic crashes, and geo-political instability, the Irish State and her people endured.

We owe much credit to the early nation builders who built up our public institutions as unassailable pillars of democracy.

As we move through the decade of centenaries we will find time to reflect on the legacy of those early nation builders, like WT Cosgrave, who laid the strong foundations of our State.

It is important to recognise that the modern Irish state would not have survived if it wasn’t for the brave men and women who served and embraced the institutions of the early State.

On Easter Sunday, outside this building, we will commend the service of generations of Óglaigh na hÉireann, An Garda Síochána and the emergency services. The Irish people believe and trust in these institutions to maintain and protect the State and our right to freedom.

They have earned that trust through generations of national service.

But a State is nothing without her people. And the Irish people themselves are the strongest defenders of our democratic tradition.

From the members of our media who speak truth to power . . . to any citizen seeking to bring about social change in our society.

It is the Irish people who work to make this State a better place for future generations that makes Irish democracy great.

Governments and Taoisigh come and go, new Dáils are elected and rejected, but the people’s will and their decisions have been . . . and will continue to be . . . sovereign.

From the bloody experience of those early days of our State, we have learned that the only way forward as a nation is to sit down together, work hard, and build a better future. When it comes to imaging the next 100 years of the Irish State, I hope that every custodian of Ireland’s democratic tradition can protect the public trust in them by putting the people and the national interest first.

I have been deeply honoured and humbled to hold the office of Taoiseach for the past five years.

There have been difficult times for our people and our country.

During these times I have seen the best in Ireland, the unyielding sense of national service shown by our civil and public services, our civil society groups, our enterprise and union leaders, and all our people . . . to build a better future for our country and for our children.

In conclusion, I’d like to finish by congratulating An Post and everyone involved in bringing this fantastic exhibition to fruition and to commend Shannon Heritage which does such an outstanding job as custodians of some of our nation’s most priceless cultural and heritage sites, like Bunratty Castle and King John’s Castle, who will be operating and managing the new Centre here.

I’m certain that this Centre will prove to be one of the top attractions for visitors to this city and to Dublin natives interested in the events of the Rising, not just during this centenary year but for the next 100 years and more.