DUP describes the New IRA as ‘sick and twisted’ 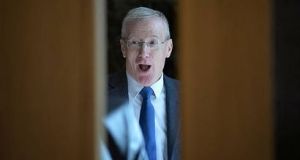 Gregory Campbell: ‘There is not, and never has been, any justification for terrorism. Unfortunately some have sought to ‘talk up’ violence as part of their attempts to thwart Brexit.’ Photograph: Getty Images

The DUP has described the New IRA as “sick and twisted” after the violent republican organisation said it would be remiss of it not to “capitalise on the opportunity” Brexit represented for it to garner support.

In an interview conducted after journalist Lyra McKee was shot dead in Derry on Holy Thursday during an attack on police, a member of the New IRA, which has admitted responsibility for her death, said Brexit and issues around the future of the Border had given it a chance to recruit supporters.

“Brexit has forced the IRA to refocus and had underlined how Ireland remains partitioned,” one New IRA army council member told the Sunday Times. “It would be remiss of us not to capitalise on the opportunity.”

DUP East Derry MP Gregory Campbell said: “The sick and twisted individuals making this claim are the same group which sought to minimise and excuse their cold-blooded murder of an innocent woman in Londonderry.

“Their actions in the days following the murder of Lyra McKee demonstrated that they are literally shameless.

“There is not, and never has been, any justification for terrorism. Unfortunately some have sought to ‘talk-up’ violence as part of their attempts to thwart Brexit.

“It is little surprise then that murderous dissidents might seek to jump on this excuse now to justify their activities despite such groups engaging in crime and terrorism for nearly 20 years before the EU referendum even took place,” said Mr Campbell.

“Indulging in the fantasy that Brexit features in the minds of these extremists only serves to in some way justify their unjustifiable lust for violence and terror.”

On Friday the British and Irish governments announced a new multi-party talks process aimed at restoring Stormont – it collapsed in January 2017 – would being on May 7th, with a review to take place at the end of the month.

A British Irish Intergovernmental Conference to discuss matters of interest to Britain and Ireland, security and the political situation in the North has also been scheduled for May 8th.

Meanwhile, Fianna Fáil leader Micheál Martin is expected in Belfast on Monday to canvas for SDLP local election candidates seeking support at the polls on May 2nd.

SDLP leader Colum Eastwood said the local and the European elections on May 23rd presented “an opportunity to support candidates who are willing to work for everyone”.

“As the primary architects and builders of the Good Friday agreement, the SDLP and Fianna Fáil are determined to ensure that our people’s right to a government is no longer denied,” Mr Eastwood said.

“Faced with Brexit and a dangerous political vacuum our people have been denied their right to a government and an assembly.”

The DUP and Sinn Féin both welcomed the announcement of a fresh round of Stormont talks.

At the weekend DUP leader Arlene Foster reiterated her party position that it would go back into government immediately without what it described as pre-conditions.

However, Sinn Féin MLA Conor Murphy told BBC Radio 4’s Today programme that any talks process needed to address “the outstanding issues of rights” and the British and Irish governments “need to live up to their responsibilities to the Good Friday agreement”.

It is expected on Monday that the Ireland’s Future grassroots campaign group will say the delivery of rights such as same-sex marriage, women’s health and the Irish language must be central to any talks process.

Following a large civic nationalism event in Belfast earlier this year the group’s next conference will be in Newry on May 9th.

I nearly fainted at the sight of the cream. How can you call that carbonara?

1 Genetics shed light on origins of Irish strains of Covid-19
2 Irish doctors on getting Covid-19: ‘In 90 minutes, I deteriorated quite rapidly’
3 Europe prepares to ease coronavirus lockdowns
4 Coronavirus: HSE reports increase in nursing home outbreaks of disease to 57
5 Coronavirus: Varadkar returns to practising medicine to help during crisis
Real news has value SUBSCRIBE