The meeting of the Council of State convened by President Michael D Higgins to discuss the Protection of Life During Pregnancy Bill is underway in Áras an Uachtaráin. 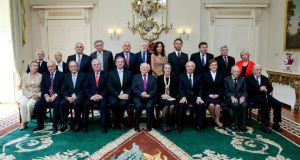 President Michael D Higgins and the Council of State which is meeting today to advise him on whether he should refer the new abortion Bill to the Supreme Court.

The meeting of the Council of State convened by President Michael D Higgins to discuss the Protection of Life During Pregnancy Bill has ended after more than three hours.

The meeting, attended by 21 members of the Council, began in in Áras an Uachtaráinat about 3.15pm following a brief photocall in the main drawing room of the President’s residence in the Phoenix Park. It ended at 6.45pm.

The meeting was called after President Higgins invoked the powers available to him under Article 26 of the Constitution to convene the Council of State ahead of him taking a decision on whether or not to refer the Bill to the Supreme Court to ascertain if it is keeping with the Constitution.

The Bill completed its passage through the Oireachtas on Tuesday night of last week, when the Seanad voted in favour of the legislation. President Higgins, who received the document on Wednesday of last weeks, will have seven days to make a decision on referral and that process must be complete by Wednesday.

Three of the Council were absent: they were former president Mary Robinson, and former taoisigh Albert Reynolds and John Bruton.

Article 26.1 states: “ The President, after consultation with the Council of State, refer any Bill to which this Article applies to the Supreme Court for a decision on the question as to whether such Bill or any specified provision or provisions of such Bills is or are repugnant to this Constitution.”

A total of 15 Bills have been referred since 1940. The last Bill referred to the Supreme Court was the Nursing Homes Bill in early 2005. The Bill proposed to prevent retrospective payments to residents of nursing homes and other institutions and was referred by then president Mary McAleese. The Supreme Court ruled the Bill was repugnant to the Constitution.

Once a Bill is found to be in keeping with the Constitution after being referred under the Article 26 provision, the legislation can never be challenged on constitutional grounds again by a citizen in the courts.

The meeting is expected to last for several hours with key contributions expected from Attorney General Maire Whelan and, possibly, from Mr Justice Nicholas Kearns, president of the High Court.