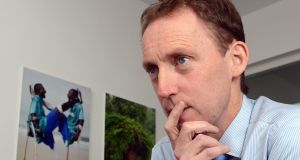 Barry Andrews has resigned as chief executive of Goal as the aid agency reels from a US investigation into its multimillion-euro Syria operation, The Irish Times has learned.

Mr Andrews, a former Fianna Fáil minister who took the helm at the organisation in 2013, informed the Goal board in August of his intention to step down as soon as his successor could be identified. That appointment will be made in the coming days.

His departure comes as Ireland’s biggest aid agency grapples with a crisis surrounding a US investigation into its aid operation in Syria. The US government’s foreign aid arm, USAID, earlier this year told Goal and a number of other agencies in the field to halt certain procurement with American funds pending the outcome of its inquiry into alleged bribery and bid-rigging involving suppliers on the Turkey-Syria border.

In a statement to The Irish Times last night, in response to questions about imminent changes at senior levels in the agency, Mr Andrews confirmed he was stepping down after concluding that Goal needed “a fresh start in terms of leadership”.

“The circumstances of the OIG investigation over the last seven months has been extremely uncomfortable for Goal and we are working hard on correcting the weaknesses identified and providing all necessary assurances to our donors,” Mr Andrews said.

He said he did not “for one moment” resent the robust oversight of Goal’s donor partners. Goal applied exacting standards to the management of its programmes and as chief executive he had endeavoured to apply those standards.

“However, it has become clear to me that Goal requires a fresh start in terms of leadership. To that end, I informed Goal’s board of directors last August of my intention to step down as CEO as soon as a suitable replacement could be identified.”

Mr Andrews will continue to lead the senior management team until next month, when his successor takes up the role.

Until then, he said, he would continue to provide “the necessary assurances to our donors that will allow Goal to continue providing life-saving services to its 12 million beneficiaries.”