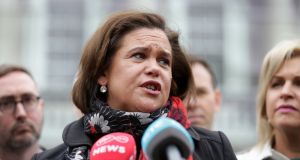 The European Commission’s investigation into insurance practices in Ireland has shown that the “kid gloves approach” of the Government towards the industry has not worked, the Dáil has heard.

Sinn Féin leader Mary Lou McDonald said “it beggars belief that it has taken the European Commission to step in here”.

The commission has opemed a formal inquiry into Insurance Ireland, the industry’s representative body over allegations of anti-competitive practices and the restriction of access by some companies to a claims database.

She told Taoiseach Leo Varadkar he had “dragged your heels on this issue for far too long”. She called on the Government to “bring the insurance industry to heel and act in the interests of policy holders and consumers” by passing legislation her party proposed on modernising the law on insurance contracts.

Ms McDonald claimed the insurance industry “has been ripping off policyholders for years and the Government has refused to act”.

But the Taoiseach insisted the Government had been proactive in tackling the significant increase in insurance costs, motor insurance premiums were down 20 per cent from their peak and had to continue to drop, and that health insurance prices were also stabilising.

However, Mr Varadkar accepted that the cost of insurance cover had affected families and businesses.

“Insurance costs in Ireland are very high,” he said, adding that the Government did not set the premiums in a private industry.

He said three Bills had been passed in the area since the beginning of the year but it would take some time for the effect of the legislation to be seen by consumers. He said a fourth Bill - to allow the judiciary to come up with new guidelines on insurance claim awards - was currently going through the Oireachtas.

Mr Varadkar said he was not familiar with Sinn Féin’s Bill but would look at it and see if the Government could work with Ms McDonald’s party to deal with the legislation.

The Taoiseach said the European Commission investigation “will assess whether the conditions imposed on companies wishing to participate in and access in the insurance-linked database may have had the effect of placing these companies at a competitive disadvantage in the motor insurance market in comparison to companies already having access to the database”.