Lesley Carroll of UUP eliminated at tenth stage of the count 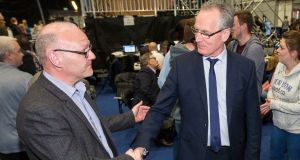 Paul Maskey of Sinn Féin (left), who has been elected in Belfast West, congratulates fellow party member Gerry Kelly (right) on being elected as MLA for Belfast North, at the Titanic Exhibition Centre in Belfast, where the counting of votes continues in the Northern Ireland Assembly Elections. Photograph: Liam McBurney/PA Wire 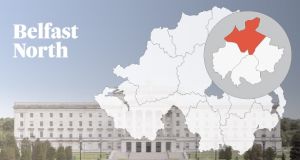 The Belfast North count is complete in the Northern Ireland Assembly elections.

It is a similar result as in 2011 - two seats to Sinn Féin, three to the DUP and one to the SDLP.

The UUP’s bright hope in Belfast North, Lesley Carroll, was eliminated at the tenth stage of the count.

Sinn Féin’s Gerry Kelly earlier topped the poll in Belfast North and said his focus in the next Assembly term will be health, education and jobs.

Mr Kelly was the only person elected at the first stage of the count in the Titanic Exhibition Centre.

“Our priority in north Belfast is inward investment, to create jobs in a black spot,” he said. “It is one of the most deprived areas as well as west Belfast and Derry. We have to try and equalise that as equality is at the heart of what we do.”

A number of sources at the Belfast count centre suggest the Belfast North contituency is likely to be the same as it was following the 2011 vote - with three DUP, two Sinn Féin and one SDLP MLAs.

At lunchtime on Friday DUP candidate Nelson McCausland said “my guess is the same six again”.

DUP deputy leader Nigel Dodds is confident the party will bring a strong team back to Stormont for the next Assembly term.

“I am concentrating on my own constituency of North Belfast but we seem to have done extremely well,” he said.

“The vote has coming out strongly so I think we are going to do very well. I am picking up very much second-hand at this stage but the signs are good for the DUP to have a good day.”

Mr Dodds said the popularity of new leader Arlene Foster is a strength for the party.

“In an election campaign Arlene is clearly very important. She personifies the tone of the campaign, the nature of the campaign. We were out very early with our five-point plan and I do hear it repeated back to me on the doorsteps.

“You look at Nicola Sturgeon in Scotland, Ruth Davidson, Tory leader in Scotland, Carwyn Jones in Wales, these parties have also played to their strengths in terms of leaders. If you have a good strong popular leader you want to get them out there and leading the campaign.”

The Progressive Unionist Party (PUP) leader Billy Hutchinson is not hopeful about his chances of being elected. The party did not have any MLAs in the last Assembly.

In Belfast the party ran Ian Shanks in South, Dr John Kyle in East and Mr Hutchinson in North.

“We are in there but the problem is the big parties are polling well,” Mr Hutchinson said. “The DUP in North had three MLAs and it looks like they are going to be returned. I was polling well in North but when we get to the count I will be behind them.

“Transfers aren’t usually our strong point so I don’t see me getting transfers to get in. John is happy enough. He is in the mix. It depends on what’s on the table. We are keeping our heads up and will see what happens.”