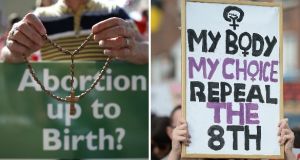 Several sources indicated that a number Fianna Fáil representatives approached TDs from outside their party, who also oppose abortion, about their approach on the issue.

Anti-abortion TDs from different parties are discussing working together to oppose the removal of the Eighth Amendment from the Constitution.

A number of concerned deputies consulted this week before agreeing to vote in the Dáil against a proposal to hold a referendum on abortion.

Several Fianna Fail TDs privately confirmed to The Irish Times that there were talks ahead of a series of votes on the Thirty-sixth Amendment of the Constitution Bill.

Several sources also indicated that a number Fianna Fáil representatives approached TDs from outside their party, who also oppose abortion, about their approach on the issue.

While all insisted there was no formal meetings, Fianna Fáil TD for Dublin Mid-West John Curran said he believed there was still a possibility of a group being formed.

“Now that there is a process in place, there may be appetite for a group to be formed but there has been no further discussion,” he said.

Fianna Fáil TD for Carlow-Kilkenny Bobby Aylward said he was willing to work with all TDs opposed to repealing the amendment to form a consensus on the issue.

His party colleague Eugene Murphy, a Roscommon-Galway TD, said abortion could become a “bargaining tool” in future if parties attempting to form governing coalitions are dependent on the support of TDs who have strong views on the issue.

“We are in a different political time. And we don’t know what could be used as a bargaining tool in future formation of government,” said Mr Murphy. “If that meant a liberalisation of abortion, I would be against it. When governments are being formed, certain issues can become central.”

Kevin O’Keeffe, a Fianna Fáil TD for Cork East, confirmed he had discussions with Independent TD Mattie McGrath but stressed they only talked about being present for the votes.

A total of 21 Fianna Fáil TDs voted against the holding of a referendum, as did two Fine Gael TDs, one Sinn Féin TD and eight Independents, with their “peculiar decision” criticised by Minister for Health Simon Harris.

Speaking at the launch of Together For Yes, Mr Harris said he could not understand why politicians would seek to deny the electorate their say.

In Brussels, Taoiseach Leo Varadkar said he would campaign in favour of repealing the amendment. It is understood the Fine Gael national executive will meet this weekend to discuss how the party will campaign. It does not have a united position on the matter, but all senior Cabinet Ministers say they will support repeal.

The Taoiseach said the Government had proposed repealing the amendment to remove “the almost absolute constitutional ban on abortion . . . so I am going to advocate for change”.