Just this once, the stricken capital's biggest slum was comparatively lucky 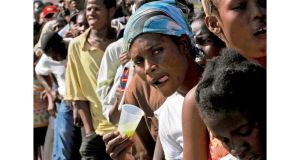 Waiting in line for food from the UN in the Cité Soleil neighbourhood of Port-au-Prince, Haiti, yesterday. Photograph: Ramon Espinosa/AP

THIS IS the biggest slum in a city of slums, home to 200,000 people. For once, the poorest of poor Haitians were comparatively lucky; few of their cinderblock and corrugated steel shacks collapsed, and the injured are receiving the best medical care available in Port-au-Prince, at Choscal Hospital in the heart of Cité Soleil. Moving with characteristic speed, the Nobel prize-winning Doctors Without Borders (MSF, after its French name Médecins Sans Frontières) re-opened the hospital it had operated during the 2005-2007 gang war within 24 hours of the January 12th earthquake. They have since carried out 300 operations. But 200 injured patients await surgery, and cargo aircraft carrying urgently needed supplies have twice been diverted from the congested Port-au-Prince airport.

“Blanc! You opened your car door without looking!” a resident of the slum shouts when we arrive in front of the hospital’s metal gates. “Your name is ‘white’ here,” my interpreter whispers. Now I know how it feels to be identified by one’s colour. People sleep 10 to a room in this warren of shacks and open sewers. Pigs feast on the rubbish in front of the Orphelinat Jesus de Brooklyn, next door to the hospital.

Loris de Filippi, the Haiti desk officer in Rome, jumped on an aircraft to Miami and flew on to Santo Domingo on the night of the earthquake. The hospital’s co-ordinator is proud of his two operating rooms, which function 24/7. Conditions in the seven tents pitched in the courtyard are basic. There’s a shortage of mattresses, and patients lie wall to wall, some on boards, many connected to IV bottles, against a permanent background of moans and crying. But compared to other sites in the stricken city, MSF is like the Mayo Clinic. The group will soon have half a dozen emergency hospitals in Port-au-Prince and hard-hit towns.

“Our operating rooms are up to European standards,” de Fillipi boasts. That’s why he’s so angry about MSF’s cargo aircraft being diverted to the Dominican Republic. The doctors had 12 urgent amputations to perform yesterday. “We have only 14 mono-use sterile room kits left,” he says. “That means we can do only 14 more operations, until we get that equipment.”

The MSF hospital treats four or five people each day for knife or bullet wounds, but de Fillipi says this is only a slight increase over Cité Soleil’s usual “structural violence”. Hundreds of people were killed during the two-year war in Cité Soleil between 30 gangs and the UN force MINUSTAH.

The gangs used to attack transport on National Route 1, which the slum straddles. Gang members would board “tap-taps” and buses, rob passengers and commandeer the vehicles into the maze of shacks and hovels. Kidnap victims from all over the capital were held in Cité Soleil.

Cité Soleil’s bad reputation probably saved it from being inundated after the earthquake. “People from elsewhere in Port-au-Prince don’t want to come here,” explains de Filippi. After five years as head of the Haiti mission, then Haiti desk officer, de Filippi finds it difficult to be optimistic.

“The country’s violent political and social crisis seemed resolved,” he says. “Then Gonaive was flooded by the 2008 hurricane, affecting 300,000 people. Now this . . . It’s difficult to imagine light at the end of the tunnel.”

In one of the operating rooms, a nurse holds up a woman’s right leg, from which a foot dangles by a shred of flesh, swabbing the limb in preparation for the Danish doctor’s scalpel. In the second room, a Belgian doctor prepares to amputate a girl’s foul-smelling infected foot. “If you get gangrene, your blood no longer circulates properly. The gangrene rises and you die of multiple organ failure within two to three days,” de Fillipi explains.

On Monday night, a father brought in his 20-year-old daughter. “Both arms had gangrene, and her organs were failing,” de Filippi says. “We gave her morphine and told the father to hug her goodbye. He begged us to operate, but we explained it was too late. We were sorry, but there was nothing we could do. What struck me most was the amount of time he spent thanking us for stopping her pain. He understood, and he was very dignified.”

Policeman Kercy Borgelas (37) lay waiting in the anteroom for the next amputation. Borgelas was escorting prisoners who were on trial in the Palais de Justice when the earthquake happened. Moments earlier, his wife Evelyne (33) had picked up the couple’s children, Kervens (9) and Loudjina Stacy (6) from the St Francois d’Assise school, which collapsed. Evelyne raced to the courthouse, where she had to pay strangers the equivalent of $30 to dig her husband out.

Kercy Borgelas had suffered a high fever since the previous night, and no longer spoke. His broken right arm and right leg were bandaged, the lower right leg doubled in size by swelling. Evelyne swished flies away from her husband, who was naked save for a towel across his midsection, as she waited impatiently for his surgery. Had their house survived? I asked. Kercy emerged from his semi-coma: “Our house is destroyed,” he said. “And all the criminals who were supposed to be judged that day were saved.”

I struck up a conversation with Altenor Mario (29) from Cité Soleil and one of 11 uniformed but unarmed security guards in the MSF hospital compound. “People say God was angry with this country, so he stomped his right foot. If God kicks us with his other foot, it’s all over.”