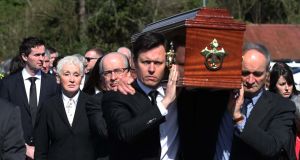 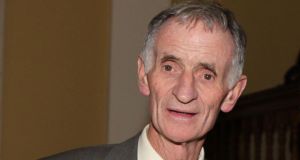 Tom Savage: “He was our hero,” said his son Anton. Photograph: Arthur Carron/Collins

While the funeral of Tom Savage attracted many well-known figures, it was simply put in the Mass: “The son of the Cooley soil returned to be laid to rest in the land he loved so well”.

In the small Co Louth Church of St James, Grange, figures from the worlds of politics, television and sport came together to say farewell to the prominent communications expert .

Chief celebrant Cardinal Sean Brady told mourners of meeting the former priest during their studies in Maynooth. “We studied the ancient classics together, played on the pitch and prayed in the same pews. We became friends for life,” he said.

Tom’s son Anton Savage, giving a eulogy on behalf of himself and mother Terry Prone, also spoke of his father’s time in the priesthood. “I am standing on the altar where my dad celebrated his first Mass . There are not many sons who can say that,” he said.

Anton spoke of his father’s work in the media, including the Irish Press and Eye Witness; his pro bono work; his building up of Morning Ireland to the top radio programme; his chairmanship of RTÉ Authority; his work as adviser to taoiseach Albert Reynolds and his role in the peace process .

He spoke of his father’s kindness and recalled how the RTÉ chairman would get list of names of those working on Christmas Eve and Day and would phone them all, thanking them for working on a day which should be spent with family.

“He wouldn’t have a care at all if none of that was mentioned. The one thing I have to do, and have to mention, is football,” he said. “The Tom I see when I close my eyes is the 6 foot 1, 14½ stone man who won a junior All-Ireland medal for Louth which now rests on his coffin.”

Anton said that his mother, Terry, through her books had created heros, which were “all essentially Tom. Just as he was her hero in fiction, he was her, and my, hero in real life.”