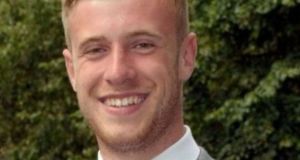 Cameron Blair (20) died after being stabbed at a house party in Cork on January 16th. Photograph: Denis Boyle

The teenager who admitted the murder of 20-year-old student, Cameron Blair when he stabbed him at a house party in Cork has lodged an appeal against the life sentence imposed on him for the killing.

The 17-year -old, who cannot be named because he is a juvenile, was sentenced to life imprisonment on April 20th for the murder of Mr Blair, a student at Cork Institute of Technology, on the Bandon Road in Cork city on January 16th.

Mr Justice Paul McDermott imposed a life sentence on the juvenile with a review date for November 2032, meaning the teenager, who has been in custody since his arrest on January 23rd, faces at least 12 years in jail.

But the teenager, who is currently detained at Oberstown Children Detention Campus until he turns 18 later this month, has lodged an appeal against the sentence imposed by Mr Justice McDermott.

A Courts Service spokesman confirmed to The Irish Times that an appeal against the sentenced was lodged on April 22nd but he said that no date had been fixed yet for the hearing of the appeal.

The teenager pleaded guilty on March 13th to Mr Blair’s murder and at a hearing on April 3rd, Mr Justice McDermott said when a juvenile is convicted of murder, they do not attract a mandatory life sentence, as happens with adults.

He said the appropriate sentence would have to be considered under the Children’s Act 1908 and he adjourned the matter until April 20th when he imposed a life sentence with a review date in November 2032.

Mr Justice McDermott said “the deliberate recourse to knives by young men must be deterred and the public must be protected”, noting Mr Blair was killed in an act of extreme and deliberate violence which was unanticipated by him.

Mr Justice McDermott described the killing of Mr Blair as “shocking” and “awful” and pointed out that the defendant knew that the CIT student was “not a threat” before he “viciously murdered” him.

Referring to Mr Blair, Mr Justice McDermott emphasised he was a decent and hard-working young man who was held in high regard and who had shown friendliness and decency in his dealings with others on the night, he said.

Mr Blair’s parents, Noel and Kathy and his younger brother, Alan were all in court for the sentencing and Mr Justice McDermott addressed them a number of times when imposing sentence on the teenager.

He acknowledged that the defendant’s release from prison in the future may be of little comfort to them for the taking of their son’s life and his guilty plea may appear to be inadequate for such a dreadful crime.

However, it reflected the underlying sentencing laws and principles, explained Mr Justice McDermott, who had earlier asked the family if they had a photo of Mr Blair and a large framed picture of him was handed up to the court.

A native of Ballinascarthy in west Cork, Mr Blair had been attending a party on the Bandon Road on the night and was acting as “a peacemaker” between those in the house and a group including the teenager seeking -re-entry.

The court heard that Mr Blair did not realise he had been stabbed in the neck by the teenager and that his last words before he collapsed were to the teenager and his friends, “Don’t worry, lads, I don’t want to be fighting”.

The teenager later wrote a letter of apology to the Blair family, saying: “Cameron was nothing but nice to me on the night and did nothing wrong to me. It was never ever my intention for any of this to happen.”

Speaking outside the court after the life sentence was imposed, Mr Blair’s uncle, Aidan Donnelly read out a statement on behalf of the Blair family in which they told how harrowing life has been since their son’s murder.

“Today has been equally distressing but we welcome the conclusion of this aspect of the investigation into Cameron’s cowardly murder,” said Mr Donnelly as he thanked gardaí, neighbours and friends for their help and support.

“The life sentence handed down today will not bring our beloved Cam back but will hopefully give some comfort if not now then over time. It is just over three months since our son was murdered.

“Having pleaded guilty we were told that due to the fact that the accused was a juvenile he had to be sentenced prior to his 18th birthday, resulting, it appears to us, in the case being expedited through the courts.

“This allowed little time for us to grieve as a family. We believe that this is something that needs to be examined and ask that appropriate authorities look into this.”