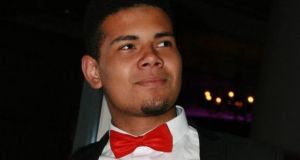 The sister of a teenager who died after taking a synthetic drug has said what happened her brother was “Russian roulette” and could happen to anyone.

“He wouldn’t have known the dangers of taking the drug,” Nicole Ryan said of her brother Alex (18), who died at a house party in Cork city in January.

“You don’t have to look far for drugs, and you are counting on word alone regarding what you are getting.”

Alex died after consuming a drug known as N-Bomb, a synthetic drug of the 2C family called 251 NBOMe.

He became ill at St Patrick’s Terrace, Green Street, on January 19th and was taken to Cork University Hospital where he was put on a life-support machine.

He died from deprivation of oxygen to the brain due to a cardiac arrest on January 23rd, with Nicole and his mother Irena at his bedside.

Ms Ryan says Alex would never have consumed the drugs if he had been aware he was possibly risking his life.

“What happened to Alex could happen to anybody at any time. It is Russian roulette,” she said.

They received treatment at Cork University Hospital and were later discharged.

Ms Ryan is campaigning to make young people aware of the dangers of legal highs and is visiting schools in Cork and Limerick.

“I tell students the story of how quickly Alex passed away and the ripple effect it has had on us. In the last year before he died he had left home (in Millstreet) and was working in the city.

“He grew up quickly. He was older and more mature. He wasn’t a baby anymore,” she said.

“I hope this campaign makes people think twice about using drugs, to give people an option to make an informed choice. It doesn’t get easier. We are facing in to his birthday soon and the first Christmas without him.”

Along with school visits, speaking on the dangers of synthetic drugs, Ms Ryan is involved with a public awareness and poster campaign, which has gone on display in pubs in Cork city and county.

Alex was a popular past pupil of Millstreet Community School. He saved four lives after his family consented to organ donation.

Ms Ryan, who described her brother as the kindest person she ever met, said “Alex had a massive heart and his heart still beats” through the donation.

Alex’s death led the HSE to warning the 2C family of psychedelic phenethylamine designer drugs - including 2CP, 2CB, 2CI and its derivative 25I-NBOMe - are all highly dangerous.

These drugs can be sold in liquid, powder and tablet form and are consumed at parties or clubs for their stimulant, mood-altering and, in some cases, aphrodisiac effects.

The N-Bomb drug was also linked to the hospitalisation of six UCD students in May 2014.