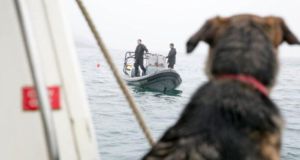 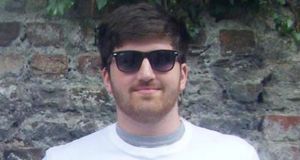 Barry Davis Ryan was last seen on June 30th when he entered the water near Beacon Point to try to rescue his girlfriend, Niamh O’Connor, who had been swept into the sea while they were out walking.

A solemn silence descended over Baltimore pier as naval divers returned to shore the body of Barry Davis Ryan.

The 20-year-old student was recovered around 200 metres from where he was last seen alive by his sister Charlotte as a family walking trip turned to tragedy.

His body was located on the seabed in 24 metres of water, partially covered by sand and seaweed.

“It would have been difficult enough to see,” said naval diver Tim O’Regan.

A flotilla of boats brought the body to shore and a procession of around 100 divers and other volunteers formed a guard of honour as the hearse left Bull Point pier. The body was then removed to Cork University Hospital for post mortem examination.

The location of the body brings to a close 10 days of agony for the Davis and Ryan families, following the deaths of Barry’s father Barry Ryan Sr (51) and his girlfriend Niamh O’Connor (20) from Glanmire, who died on June 20th after Niamh was dragged out to sea and both Barry Sr and Barry Jr jumped in to save her.

John Chambers was among a team of five with Atlantic Divers in Cork city scouring the sea bed at Eastern Hole bay when he spotted the body, in a shallow sea grave of sand and kelp. Visibility was between three and four metres with a slight surface swell. “We were going to keep going until we ran all the way into the cove,” he said.

Mr Chambers arrived on Wednesday with a team of nine volunteer divers who completed six dives over the past three days.

“It’s a sense of closure for the family and I hope it gives them that. These guys are all trained divers and it’s something they can use to help other people when they can. Emotionally, after something like this, it’s something they will go back and think over now in the next few days,” he said.

“There’s a lot of kelp and heavy rocks and a lot of weed, the body was slightly covered in weed and some sand had washed in around it. It would have been difficult enough to see,” Mr O’Regan said.

“We were into day 10 here almost and people had begun almost to lose a bit of hope, but, thankfully, perseverance has paid off. The local community spirit has been phenomenal here for all of us,” he said.

The search, coordinated by WCUSR utilised charts and shot lines along the sea bed to ensure a thorough search of the Eastern Hole bay area. Coordinators were confident the body would be located in the Eastern Hole area, on the advice of local experts and fishermen.

Eamon Barry of WCUSR coordinated the search effort on shore from early morning alongside John Kearney on Friday.

“I’m just very happy for the family, his mother was here last night and the one thing she said was she wanted was closure. We got that today and there is a massive group of people to thank for that. It wouldn’t have happened the effort and support of all the people that came down here over the past two days. It was amazing, it’s a great feeling to be part of it,” Mr Barry said.

Local woman Geraldine Sheehy was a among the team of volunteers providing sustenance to the various search teams at the pier. “I’m here since 7.30am this morning, we didn’t want to go home because of the fact we were waiting for good news which thank God we got,” she said.

“It’s hard to talk about it, I know the family quite well. Charlotte and Arthur were in my children’s classes at school, it’s been horrendous. There’s a sense of grief but relief too, a sense of happiness that it’s all over,” she said.

John Wolfe, Chairman of Mallow Search and Rescue were among the last three dive teams in the water when Barry’s body was located.

“It would be very disappointing to have gone home without a result,” he said. “It’s a relief because it was practically the last dive, there were only two or three teams left out there diving. We were finishing up then because the weather was turning and we were looking at next Tuesday after that.

“It would have been devastating for the family to see everyone clearing off out of here today with nothing found, so it’s great to have found him,” he said.