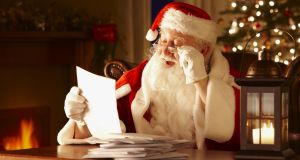 ‘All I knew was it was up the chimney and Santa would get it.’ Yvonne Foley said. photograph: iStock

A 1960 letter to Santa found more than 30 years later behind a chimney in Cork is finally set to be reunited with the person who wrote it.

A chain of people have been involved in tracking down Yvonne Foley, who was only six or seven when she composed her Santa letter 60 years ago.

Builders Ger O’Brien and his friend Kevin Gregan, who has since died, were renovating a house on the Western Road in Cork in the late 1990s when they discovered the letter to Santa Claus in the blockwork behind a chimney.

“We thought it was just absolutely fantastic . . . It was encrusted in really dark soot,” Mr O’Brien told Cork 96FM’s The Opinion Line with PJ Coogan.

As a young girl, Ms Foley had asked Santa for a “jar” (a hot-water bottle), a bottle for her doll, a stick with a balloon on it, a game of Ludo, and a Rolls Royce “dinky”, which is a miniature car.

Mr O’Brien said it was interesting to compare “what that little girl was looking for back in 1960, as opposed to what kids are getting today”.

In 2020, the letter was rediscovered by Ryan Gregan, the young grandson of the late builder Kevin Gregan, in a diary at his grandparents’ house. Knowing the letter was special, Ryan brought it to school, and his principal Norma Whelton managed to track down Yvonne Foley through social media.

Speaking on air, Ms Foley thanked Ryan for handing in the letter, saying: “Your grandfather would be so delighted that you found me.”

Noting the letter was dated November 1st, 1960, she explained she was “always very anxious writing my letter to Santa”.

Ms Foley said she suspects Santa Claus left the letter in the chimney on purpose for her to find years later: “He works in such mysterious ways,” she added.

Ms Foley said she hopes to be reunited with the letter when public health restrictions are lifted.