Repairs to roof of Kilmainham apartment block to cost owners €10,900 each 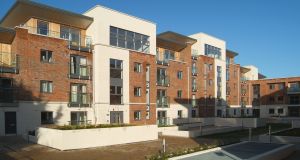 Image from circa 2007 sales brochure for Hyde Square, Kilmainham.

Apartment owners in Dublin 8 are planning to take legal action after being presented with large bills for the repair of a decaying roof.

The roof of one of the blocks at Hyde Square apartment complex in Kilmainham is being held together with push/pull ties because the plywood underlay is disintegrating and the roof canopy is not properly secured to the building’s walls.

Surveyors have also found issues with fire safety because the roof was not properly compartmentalised or insulated, meaning a fire could spread there faster than it should.

These problems are also present in two other blocks at the complex, though they are not as severe.

Owners are now facing bills of up to €10,900 each to fix the problems, while a solicitor is preparing legal proceedings on their behalf against the developer and other relevant parties.

Hyde Square was developed by Megard Ltd, which subcontracted the building work to Galway-based firm Purcell Construction, which has an office on the Hyde Square site.

Despite refusing liability, Purcell Construction has met with the engineers and surveyors who are carrying out remedial work on the building, provided structural engineer reports to aid them and has made “an offer” of an unknown amount of money to help fund the works.

Owners first became aware of the scale of the problem in May 2017, when Noel Larkin & Associates Building Surveyors told an emergency general meeting of the management company that inspectors heard a “crunch” when walking on the roof of block A of Hyde Square (apartments 1-27).

They confirmed that the plywood beneath the surface was in decay; that moisture was trapped between the layers of the roof, and that ventilation ducts extending through the roof void were not properly insulated.

The inspectors noted the use of sub-standard building materials and a lack of fire-stopping between the roof deck and partition walls.

A follow-up letter from Noel Larkin & Associates was sent to owners in July 2017, advising that if left untreated “it is possible that the deterioration will ultimately lead to a large scale failure of the roof covering”.

Images taken by the surveyor show pools of water on the flat roof, cavities without insulation and flaking plywood underneath the roof covering.

The letter notes that similar damage is present blocks B and C (apartments 28-82). At this stage, owners were asked to approve a levy of €160,000 to fund the first phase of repair works. This was calculated as between €1,480 and €2,660 per apartment, depending on its size.

Some €129,640 of this levy was successfully collected by the management company by October 2017, and the remedial work began. However, when the roof was opened up, more problems were found and the works were postponed.

Following an inspection by engineering consultant Aidan O’Connell and Associates in January 2018, a decision was made to fit push/pull ties to hold the roof in place because of the serious structural deficiencies the consultants found with the steel framework.

These structural steel issues are worst in block A and less severe in blocks B and C. Fire consultants Pro-Fire also found a fire had taken place in the roof of block B at the time of construction, which had been concealed from owners and had left damage.

It was also noted that fire could spread through the development much quicker than it should because the walls of the building were not built up to roof level.

At the same time as arranging a list of remedial works, the property management company, Wyse, which manages the scheme for the owners, employed a solicitor and sought senior counsel advice to look at possible legal recourse for the owners.

In June 2018 owners voted to commence legal proceedings against the developer and “any other relevant parties”, while also approving a third payment of €100,000 to complete the roof works. The total bill per apartment increased to between €6,105 and €10,926.

As of December 2018, some 17 owners had come forward as plaintiffs and legal proceedings had been drafted.

Dublin City Council owns nine apartments in this development and said it has “made a payment on behalf of our tenants to the management company for repair works”.

Wyse, on behalf of the owners’ management company for Hyde Square, told The Irish Times: “A number of shortcomings were identified in the building, which primarily relate to the roof. The Owners Management Company Board [sic] and its members have appointed the necessary team of professionals, obtained the required legal advice, prepared a programme of works, appointed a contractor, and the necessary remedial repairs are being undertaken in March”.

“Purcell Construction was not the developer or vendor of the apartments; it played no role in construction design and following an MBO it is now under new ownership.

“In late 2017, Purcell Construction first became aware of concerns regarding the roof at Hyde Square and since then we have been actively engaged with the agents of the management company, on a without prejudice basis, to help identify and resolve issues to the extent practicable at a time when key stakeholders engaged in delivering the project were either unwilling or unavailable to do so.”

Megard Ltd did not respond to a request for comment.

Tánaiste shares outrage of the Opposition at killing of George Floyd in the US 20:03
Several weeks of rain needed to replenish Irish Water supplies 19:47
Mother of three (41) who had to fundraise for her own cancer treatment has died 19:43
Which cars are bad for environment? Irish consumers are confused 19:31
Varadkar offers Independents Jackie Healy-Rae style deal to support coalition 19:22