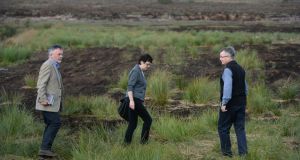 The remains recovered from Oristown bog near Kells in Co Meath early last month were this evening confirmed as those of IRA victim Brendan Megraw, one of the Disappeared.

DNA tests on the remains “positively indicate that the remains are those of Brendan Megraw”, confirmed Frank Murray and Ken Bloomfield of the Independent Commission for the Location of Victims Remains.

Dublin coroner Dr Brian Farrell “has accepted this as evidence of identification and will shortly authorise the release of the remains to the family”, said the commissioners.

“The thoughts of everyone in the commission are with the Megraw family at this difficult time. The family have indicated that funeral arrangements will be announced in due course,” they added.

Brendan Megraw was a 23-year-old married man from west Belfast who was abducted by the IRA from his home in April 1978. His wife was expecting their first baby at the time.

He was one of 17 people murdered and secretly buried by republican paramilitaries during the Troubles. Of the 17 one was killed by the Irish National Liberation Army (INLA) and 14 were killed by the IRA. There were no admissions of responsibility in two of the cases although it is believed they too were victims of the IRA.

The remains of 11 of the Disappeared have now been recovered. The bodies of six of the Disappeared remain missing. The commission has no leads about Joe Lynskey, who disappeared from west Belfast in 1972, when he was in his 40s, or about Capt Robert Nairac who was shot dead just south of the Border in 1977.

The INLA provided information about Seamus Ruddy who was killed in Paris in 1985 by the organisation during an internal feud, but it was the wrong information.

It is believed that Columba McVeigh, who went missing in 1975, is buried in Bragan bog, near Emyale in Co Monaghan, but several excavations of the site since 1999 have failed to locate his body.

It is also believed that Kevin McKee and Seamus Wright, who went missing from west Belfast in 1972, are buried in a bog at Coghalstown, near Wilkinstown in Co Meath.